My objectives:  explore the desert, get acclimated to the heat, build back some running stamina without aggravating injuries, continue to condition the feet.  The goal isn’t to overdo things, but still to do a lot, and this requires an aggressive tempo of operations:  breakfast, run or hike, dinner, plan the next day’s activities, bed — repeat.  The planning is time-consuming:  there’s an overwhelming volume of information on the internet, and not all of equal quality.  My best source turns out to be the motel clerk who’s been exploring this area with his wife for the last ten years.

The trail to Hidden Valley starts with a series of steep switchbacks climbing 600 feet up the side of a plateau on the south side of Moab.  Once at the top, I marvel at the pale green valley that opens up, dotted with sage brush, green ephedra, black brush, prickly pear, yucca, salt bush, and winterfat.  Looking back the way I came, here are the 12,000-foot La Sal Mountains staring directly at me across thirty-five miles of desert.  How curious that Hidden Valley is oriented directly towards these mountains.

I’m taking a break in the shade of a juniper tree, when a gentleman walks over and says ‘hi.’  George is a 78 year-old runner with 60 marathons under his belt, and this is his favorite training route.  George gives me some directions towards a panel of rock petroglyphs which I’m eager to visit, although he cautions me about a scree field that needs to be crossed to reach them.  Then he trots off along the trail, moving too fast for me to follow, since I’m not wearing shoes.

I trundle along the soft sandy path and after another mile spot towering cliffs of mustard-colored Navajo sandstone and a scree-covered slope leading to their base.  I step off the trail, poke around in a small draw, make my way slowly up towards the cliffs, and here they are, images on the rock wall scratched a long time ago, by people trying to interpret and communicate, no different than me.

The scree has taken a toll on my feet.  Some of the rocks have sharp ridges and pock-marks, likely of volcanic origin, and others make ominous clinking noises underfoot, sounding like shards of kiln-fired ceramic.

My feet are starting to hurt, and I’m groaning with irritation, when around the corner appears a young black woman.

I remark that I saw her at a gas station earlier this morning when I was buying water.  She was getting directions.  Another coincidence.

But that’s where the similarities end.  We compare notes on our kits.  She’s wearing shorts and a halter top and carrying nothing but a water bottle, while I’ve got on desert hat, Badwater arm sleeves, and a 20-liter pack with four water bottles, two lights, extra batteries, personal locator beacon, first aid kit, tarp for shelter, jackknife, cordage, cellphone with map app, battery charger, water filter, trekking poles, and other odds and ends including a small thermometer.  Kenya explains she likes to “go with the flow.”  In the Catskills, where I spend a lot of time hiking, my load-out is closer to hers, but not in this unfamiliar desert environment.

Kenya departs, while I shelter under another juniper tree and drink some water.  It’s time for shoes to go on, and for the next 30 minutes I run back and forth on the sandy trail, under the blazing sun, taking periodic breaks in the shade of small juniper trees to keep from overheating.

The Porcupine Rim trail leads up from the Colorado River onto a 4,000-foot high plateau to the northeast of Moab.  The hike starts on some strangely wavy sandstone —  an ancient seashore?

On the way up the sounds of laughter rising from somewhere far below. . . and then later on a glimpse of rafts floating along in the Colorado’s silty green water.

I’m perched on a knob, once again in the shade of a small juniper tree, when several mountain bikers whiz past.  I watch them descend into a saddle a mile or so off at which point two of them pull off to the side.  Some kind of conversation is going on.  The word “spoke” floats up to me. 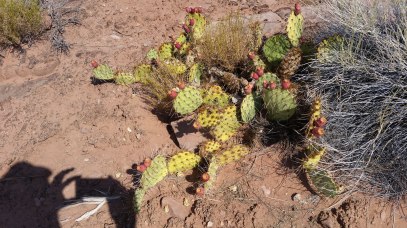 After five miles up, my feet have had enough.  Shoes go on and I run all the way back down, admiring the Colorado River as it flows off towards Canyonlands National Park, where it’s joined by the Green River, and eventually into the Grand Canyon, after which it is impounded by the Hoover Dam on the border of Arizona and New Mexico to create Lake Mead.  So much water is diverted for agriculture in Southern California and Mexico, that rarely does more than a trickle reach the ocean.

A thirty-minute drive takes me to the Island in the Sky district of Canyonlands National Park, where I take a 5-mile loop called Neck Spring trail, moving slowly through gullies and along expanses of slickrock sandstone dotted with lichens.  Lichens are long-lived creatures, but if you could speed up the clock, you would see them appearing, expanding, and fading away like splashing rain drops. . . possibly a similar pattern to the birth, expansion, and death of galaxies.

The Neck Spring Trail circles around, ends up back on a paved road, and passes by “The Neck,” which offers views of a steep drop-off to the east. 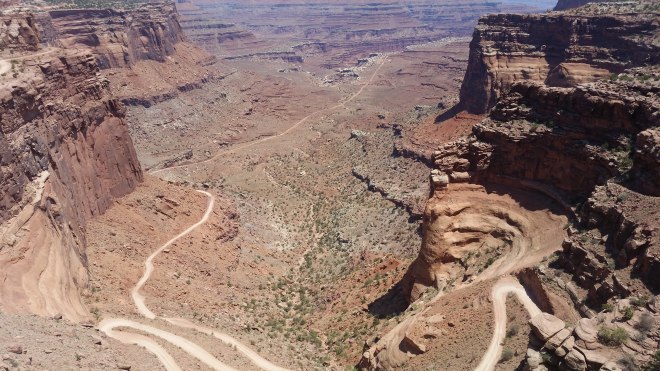 The confluence of the Colorado and Green Rivers is located in the Needles district of Canyonlands, but that’s a longer drive from Moab.  I’d very much like to see that confluence, but it will have to wait for a future trip.

Speaking of canyons:  within a short drive of Moab, first Hunter Canyon, where I run in sandals along sandy trails, discovering tamarisk, willow, single-leaf ash, fremont barberry, gambel oak, southern bulrush, and prickly pear.  By the end of the run, my sandals have fallen apart.  From now on, it will be trail running shoes or nothing.

Even better, Grandstaff Trail, which follows a narrow slot canyon with a rushing stream that flows into the Colorado.  Running barefoot on sand that’s as nice as the beach, in the heat of the afternoon but shaded from the sun, through thickets of vegetation, dodging some poison ivy.  How much fun to go fast!  And here’s a large family coming the other way, and the kids are all barefoot! (but not the parents)

I decide to hike to Navajo Knob, the high point in the park.  The trail is a mix of soft sand and slickrock sandstone.  Along the way, sights of the “Castle” down below.

I’m discovering that the trail surfaces in and around Moab can be a little deceptive for the barefoot hiker.  The sandstone is called “slickrock,” and at first it feels smooth underfoot – but smooth like fine-grained sandpaper, and after a few miles, unless you place each step precisely, your soles start to feel irritated (it’s like running on pavement, you have to place each step with care – no scuffing or sliding).  And the soft orange sand – in the sun it gets really hot.

I make it to Navajo Knob, take in the panoramic vistas while clinging to the sandstone, and then head back, determined to complete the 9-mile round trip without shoes.  But after a short while, sore feet are defeated by a section of gravel.  On go the shoes, and I trot the rest of the way down, passing a couple of tourists who have wilted somewhat in the heat.

That evening I string up my tarp in the Capitol Reef campground.  I’m trying to bang in stakes with a rock — and getting frustrated — when a lady at a neighboring campsite lends me a hammer.  We compare notes on hiking destinations, and I learn that Zions in particular is quite crowded.  I’ll need to do more planning:  figure out the best places to hike or run, where to camp or stay, and routes of ingress and egress that will hopefully spare me congestion.

You road I enter upon and look around, I believe you are not all that is here,
I believe that much unseen is also here.
— Walt Whitman, Song of the Open Road 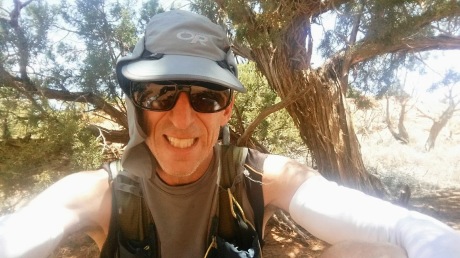 5 thoughts on “More in Moab”