The goal was not just to bag three peaks for the Grid, but also to practice “natural navigation” i.e., moving straight through virgin forest without using map, compass, or GPS (although these would be carried just in case).  Glancing at the map, we all agreed that the bushwhack up to Balsam Cap, although long, would be relatively straightforward, all we’d need to do was follow a twisting ridge….

The operation started out very much on plan.  My son Philip, just returned from ROTC basic training (which includes plenty of land navigation) and I were up at first light and soon heading north across the Shawangunk Mountains, which were socked in with dense fog.  Hurricane Harvey had pummeled Texas, and now its remnants were moving through our area, and rain was forecast with close to 100% probability, although the winds would be light.

Soon enough we were pulling into the trailhead, arriving ahead of schedule, and of course Alan had gotten there before us, as he almost always does.  A few minutes later Tom arrived, also ahead of schedule, and we shuttled over to Kanape Brook parking area, where our journey would commence.  Alan and Tom are both experienced trail runners, not only punctual, but also fit, experienced, and steady, and they would be great company on this adventure.

The first leg was straight uphill towards the shoulder of Breath Hill, which Tom, who had done his homework, explained is commonly referred to as “Out of Breath” Hill.  We soon found out why.  According to the map, the ridge rises 1,000 feet in just over half a mile, for a grade of around 42%.  Up we struggled, sometimes on all fours and face to face with wet leaves and earth, sometimes wending our way among rock outcroppings, and quickly warming up despite low 50 F temperatures and steady rain.

Philip, Tom, and Alan were wearing shoes, of course, as sensible runners and hikers would, while I was going barefoot (I’d warned them it would be a slow hike, in order to keep my sore ankle tendon from getting cranky), but the forest was relatively open, and the ground was soft and covered in deep leaf litter, which made it comfortable for me.  I brought up the rear and was pleased that I could keep up with them, at least some of the time.

Nearing the top, we crossed an old forest road which Tom remembered from his map (it was not on mine), and now the slope moderated as we headed for the shoulder of Breath Hill.  And judging from an after-the-fact review of our GPS tracks, this was where things went wrong.

We pulled up for a moment.  Originally I had planned to build a “sun compass” but obviously that was not going to work today.  Instead, I looked up in the sky and since it was still early morning, I announced “that direction looks brighter, that must be east.”

The next thing I recall was high ground to our right and thinking we’d gotten around to the left side of Breath Hill.

We turned east, or so we thought, and encountered a steep downhill slope, which we surmised was the draw before hill 2375, our next objective, although with hindsight this was the valley on the north side of Breath Hill.  Veering away from the downhill, we next crested some high ground with a patch of ferns in a clearing and thought this must be hill 2375, but this was actually the summit of Breath Hill.  We then proceeded exactly according to plan (we thought) onto a broad, level ridge and were just starting to look for the point where it would turn sharply uphill — when instead the slope dropped off to the front.

We were sunk, and I knew it immediately.  Since you can’t see very far in these thick forests, we headed another 100 yards before giving up and pulling out the GPS.  We were way off course.  The experiment in natural navigation had failed.

It was time for a council of war.  The choice was to backtrack and take another stab at Balsam Cap, or head directly for Peekamoose, which was our ultimate objective, and which the map indicated was a relatively straightforward bushwhack from where we now found ourselves.  Philip made a motion for Peekamoose, and I seconded, mindful that we were already wet (despite everyone wearing goretex) and that with two hours shot, Balsam Cap would be stretching beyond the reasonable.

The mission was a scrub, but not all was lost.  Heading west from Breath Hill (instead of east) had taken across a beautiful open ridgetop covered in endless waves of hay-scented fern.  It was one of those Catskill surprises, where after struggling over rugged terrain cloaked in dense vegetation, suddenly you are moving as easily as the breeze.

To stay within DEC forest (and avoid private property) we needed to move north, so I pulled out my compass and led the way, but something didn’t look right, and after a quarter mile I stopped for a GPS check.  Instead of north, I’d led the group south.  On the compass, the black side of the arrow indicates south, I recalled ruefully, it’s the red side that’s north.

On the second try I led us north and then Alan took the lead while I periodically checked the compass, but he was dead on.  We were aiming for a brook, and in due course dropped down a few hundred feet and discovered a faint, dry, groove in the dirt and stood there wondering could this be it — until Alan saw over the next rise a real brook with clear water rushing over and among dark sandstone slabs and raindrops flickering across an open pool. 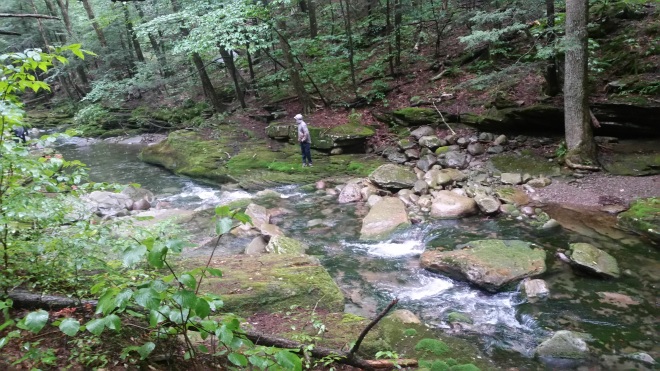 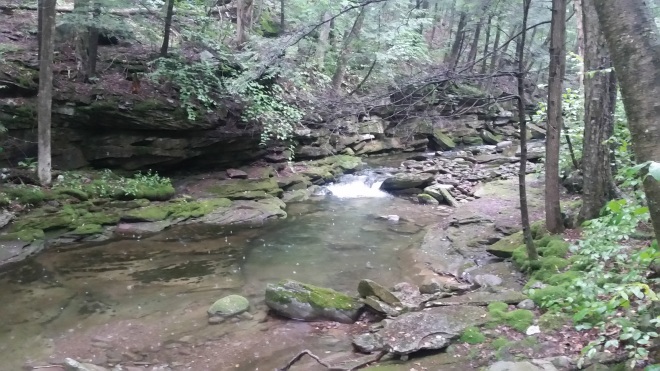 From the brook, we turned northwest and began marching uphill through beautiful open forest.  I charged ahead, feeling that I ought to move quickly while the moving was good.  After a little while, the forest became denser, with lots of small twisted beech suckers getting in the way, and a large quantity of deadfall, and we started to step across stones, and sometimes the dead leaves covered up gaps between, so stepping carefully was paramount.

The rain continued steadily, and I was soaked and feeling cold — in fact the chill was more difficult to contend with then bare feet or the work of going uphill.  I kept up a running debate in my mind as to whether I’d put on sweater or long johns once we reached the top.  Then we saw a fir tree, the first of the day, which signaled we’d arrived in the boreal zone.  Tom announced we were at 3,500 feet, and almost at the top.  Peekamoose Mountain finally awoke and threw some obstacles our way, but it was too little too late.  There were some steep cliffs, but we found ways to squirm up, at one point stepping along a narrow ledge between rock wall and spindly spruce, and then there were blazes in sight:  we’d reached the trail and the summit was only a few yards away.

Success!  And what was interesting, having taken the trail to Peekamoose so many times, which follows the edge of a narrow ridge all the way to the top, this time we’d discovered that Peekamoose also has this more gentle side, with a broad slope of moderate grade.

We made the quick jaunt over to Table Mountain, and then turned about for the 5 miles back to the trailhead.  Tom, Alan, and Philip charged off down the trail quickly leaving me behind, while I considered putting on shoes in order to keep up but decided to keep the ankle happy by moving slowly.  At least I was comfortably warm now, with both sweater and long johns on.

With the ground wet, the path was soft and even the rocky sections were surprisingly comfortable, and I made good time, taking note of the long winding ridge, the view points, and scrambles, all remembered from prior hikes, including one with Alan during the winter, but in many cases looking different, as it’s often on the way up that one pauses to observe things, while the way down is a rush.  At one point about half way down the mountain, I turned a bend in the trail and there before me the narrow ridge fell away into a forest of very tall trees, those on the eastern side spattered so thick with flavoparmelia carperata (common greenshield lichen) that the trunks were almost completely green, while those in the depths of the forest were brown and gray, and in the shadows mist was hanging motionless in the air.

When we regrouped at the trailhead, the sun came out, and as we drove back, the last of the gray rainclouds rolled over the top of the Shawangunks and slid off to the east.

The four of us stopped at Aroma Thyme Bistro in Ellenville for snacks and drinks while we conducted an after-action review of the day’s adventure and began laying plans for another attempt on Balsam Cap.

With twelve or thirteen miles under foot, the ankle was sore the next day, but what else is new.  It wasn’t bad enough to spoil a hike with the family up Windham High Peak on a beautiful, warm, clear, fresh, late summer afternoon. 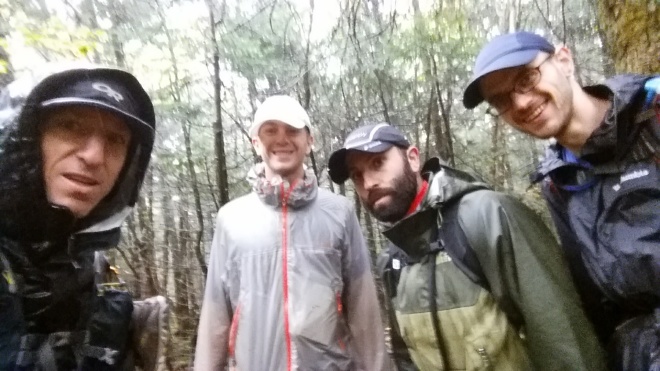 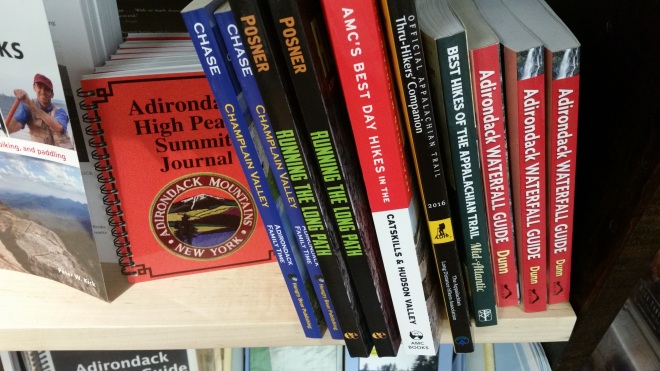