Low hills flank the Thru-way, and through the car window you see mostly trees.  On the drive up this morning, the sky is clear, and the sun’s rays are pouring down with such intensity that every detail of the passing trees stands out:  stout trunks spattered with lichen and tangled with vines, leafless branches reaching, twisting, interweaving.  The clarity is astonishing:  it’s like a geometric pattern, brightly-lit but bewildering.

However, there’s a spot just north of New Paltz where the road dips and the hills pull back, and for a moment a vista of the Catskill Mountains is revealed.  This morning they appear huge and rounded, a soft mottled mix of brown and tan, flanks dappled with blue cloud shadows.  The detail has seemingly melted away with distance, and the mountain plateau looks like some kind of lost world – but the vision is divulged for only an instant before the road rises back into the hills again.

Of course, closer to the mountains more details emerge; the ridge tops resolve into jagged lines of spruce and fir tinged white.  I arrive at the Devil’s Tombstone Campground full of enthusiasm, imagining all the peaks I could climb today, but on opening the car door, feeling the cool air, and staring down at the ice sheet that covers the parking lot, some reality seeps back in.  Also, with a few aches and pains to be mindful of, maybe it’d be smarter to take it easy.

But the aches and pains don’t complain too loudly, and the climb out of the campground feels good (maybe time spent on the stairmaster has paid off).  The path is rocky and steep, but the snow has mostly melted, and the micro-spikes I’ve strapped over my shoes bite into wet leaves and soft dirt; I step carefully over stones, not wanting to damage the teeth.  An obstacle blocks the way:  water has poured over a rock ledge and frozen solid, coating everything in thick ice, and this barrier requires some scrambling to get around.  After this, though, the footing is pretty good.

The path continues steadily uphill.  Ahead there’s a grove of hemlocks.  Entering the grove, I hesitate, hearing furtive sounds, but looking around, there’s nothing to see but a shaking branch.  I pause again and this time spot a small bird with a russet chest, slate blue back, and black-striped head jumping from trunk to branch just a few feet above.  Up ahead the “childish yank” of the red-breasted nuthatch sounds through the woods (this is John Burroughs’ description).  And then the trail is heading out of the hemlocks and through the omnipresent beech and birch of the mid-elevation Catskill forest, and the sun is beaming through the branches and warming the air.

At the lean-to on the southwest shoulder of the mountain, I pause to readjust the microspikes and put some tape on my toes where the straps are pressing through the thin uppers of my minimalist trail-runners.  Then it’s off toward the summit of Southwest Hunter along an unmarked trail that tunnels through a fir forest.  I’m running where the path is clear, dodging branches drooping with snow, feeling exhilarated to be on the move.  At the summit, the trees are crusted with snow and dazzling in the sunlight.

On the way down toward the Spruceton trailhead, I pass two hikers named Dmitri and Natalya, which I know because I read their names on the sign-in book in the Southwest Hunter summit canister.  Dmitri explains that he is working on “The Grid.”  I raise an eyebrow.  He elaborates:  to complete the Grid means climbing each of the 35 high peaks in every month of the year.  And no, you don’t have to do this in a single year, you can take as long as you want.

I thank Dmitri for this interesting information and head off.  Now I’m running downhill, sliding through the snow, shirt tied around waist, enjoying the sun.  After a bit, there’s as much wet leaves and dirt on the path as ice, so I unfasten the microspikes and carry them in one hand (freed from the pressure of the straps, my toes are much happier).  At the bottom, the gravel road is covered in frozen slush, but I trot across.  By focusing on core muscles, flexing at the ankles, landing on the balls of the feet, I’m able to navigate this broken surface, not at great speed, but it feels wonderful to be moving along purposefully.

I pass the parking lot where my attempt to thru-hike all 35 high peaks ended prematurely last August, then head up the long dirt road toward Hunter Mountain’s peak.   Feeling energetic I decide to run a few steps, then walk a few, then run a few more.  A crowd of hikers is emerging from the woods, evidently having just completed the bushwhack to Rusk’s summit.  Their English isn’t good, but they give me a thumbs-up signal, which I return.

Reaching an intersection at around 3,000 feet, I meet some more hikers and stop to talk for a little bit.  I mention the Grid, but they have other goals.   Looking up, I see the path is covered in snow and ice.  The microspikes go back on.  There’s a magnificent tree, whether spruce or fir I’m not sure, but it’s one of the tallest I’ve seen in the Catskills and its branches are covered in lush green needles.

At around 3,500 feet, the line of frost crosses through a grove of trees, coating the topmost branches white, while the trunks are bare.  Past this point, all surfaces are white.  A little later, I reach the summit of Hunter and find a brilliant snow-covered clearing with a firetower in the center surrounded by short fir trees crusted over in white.

The steps and railing of the firetower are covered in thick flecks of rime ice.  I climb up a few levels, stepping and gripping cautiously.   From here, the mountain plateau spreads out all around me.  It’s like standing in the highest turret of a fairy castle and gazing out across an enchanted landscape.  To the north rise the familiar three humps of the Blackhead Range:  Thomas Cole Mountain, Black Dome, and Blackhead.  The fir thickets on their shoulders are frosted white, but the rest of the mountains are brown.  Towards the southern horizon, Slide Mountain and its neighbors shimmer among waves of blue light.  To the east, Plateau Mountain screens the rest of the escarpment along which the Devil’s Path wends its way.  To the west, the Spruceton Creek stretches out for several miles, flanked by two rows of low mountains, and further west great flat brown plains reach out into the distance. 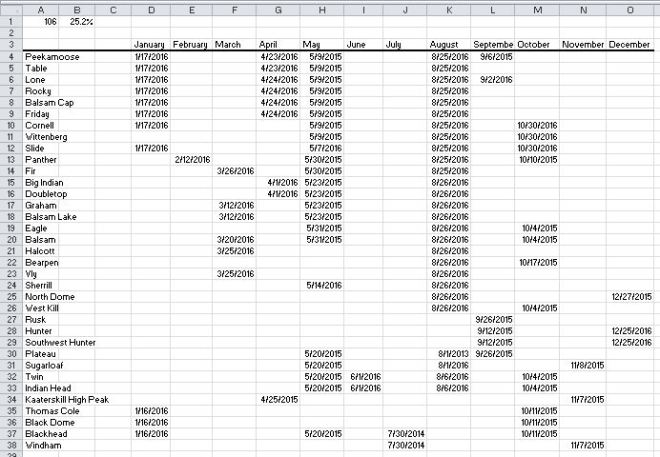 Is the Grid taking things too far?  Is this a pointless obsession?

Or was John Burroughs correct when he wrote, “To learn something new, take the path you took yesterday.”

It occurs to me that the word “grid” is similar to “matrix.”  And that leads to a question:  should I pursue the Grid or plug back into the Matrix?

8 thoughts on “Discovering the Grid”