After slipping and sliding on microspikes that didn’t have spikes, I got a pair of the real thing from Catskill Mountain Storehouse and took them out for a 10-mile spin in the Blackhead Range.  The reward for the effort was amazing views in all directions, with recognizable landmarks 20, 30 and perhaps even 90 miles away. 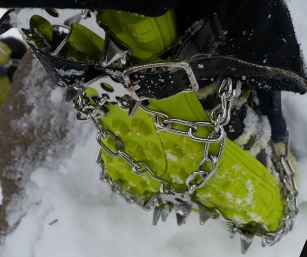 The car thermometer read 22 F upon arrival at the trailhead, and accordingly I bundled up and loaded extra layers in the backpack before heading out on the trail towards Thomas Cole Mountain.  The microspikes worked perfectly:  their teeth dug into the hard-packed snow and where the trail had been flooded, they bit with authority into the swirls and mounds of grey ice.

Even with good traction, it was hard work climbing the ridge, and soon the goretex jacket came off and then the quilted pullover, until I was down to a long-sleeved t-shirt.  Sweating is not a good idea when you’re out in the country, unless you want to freeze when you stop.

After about two miles of steady uphill travel, I reached the “Camel’s Hump,” a local summit on the way to Cole Mountain, and paused to admire the view.  To the north, Windham High Peak stood out through a gap in the brush, and behind it way off in the distance a range of peaks brushed up against the horizon.  Could this be the Adirondacks? The breeze quickly chilled me, so I didn’t stay long.  But upon returning home and checking the map, it seemed possible this was the case and that I was staring at Spruce Mountain, or one of its neighbors, some 90 miles away.

I trucked along past Thomas Cole Mountain, whose summit is cloaked in fir and spruce and then dropped down into the next saddle and began the 400-foot climb to the summit of Black Dome, which also has no views.  But coming down the far side, there’s a marvelous vantage point, where the trail drops down steep rock ledges.  Now I was looking head-on at Blackhead, whose summit is covered in more spruce-fir forest, crusted white with rime ice.

On the way up Blackhead, the trail is steep and exposed, the rock steps braced with metal stakes and dripping with ice.  I could hear the wind rushing through the pass below, and whipping intermittently across the summit above.  Pausing here, I looked south and saw Hunter, Plateau, Sugarloaf, Twin, and Indian Head laid out in row, a jagged mountain wall stripped of foliage, looking strangely naked.  (On a previous trip to the Catskills, I had experienced this vista in reverse:  looking north from the shoulder of Sugarloaf, I had admired Cole, Black Dome, and Blackhead, visible as a row of three rolling peaks.)

Next I turned to the southwest and found I could just barely make out Slide Mountain, as well as some of the eight mountains that surround it in a ring, 23 miles distant on a bearing of 216 degrees.  A few degrees farther to the west, I thought I saw the firetower on Balsam Lake Mountain, looking like a hair, 29 miles away.  I wasn’t sure, but once back at home, I verified there’s a direct line of sight between the two mountains using a nifty website called Heywhatsthat.com.  And if that wasn’t enough proof, the next day Kimberly Cuozzo shared with me an image of the Blackhead Range she took from Balsam Lake Mountain the very next day.

I trudged up the slope, moving slowly through deeper snow.  After a little while, I reached the summit of Blackhead, marked by a small clearing in the boreal forest.  The northern horizon glowed through the branches, and out there somewhere in the distance lay the Adirondacks, or so I thought.  Underneath the snow was a large boulder that marks the top of the mountain and an intersection with the the Escarpment Trail and the Long Path.  It was time to turn around and head back.

Descending the steep and exposed shoulder of Blackhead, Black Dome reared up in front of me, looking enormous.  But distances are sometimes shorter than they appear:  the descent and ascent were only about 400 feet, and the distance to the summit wasn’t even a mile.  All it would take to get there was just a little patience…and a pair of really good microspikes!

Views from the Blackhead Range

2 thoughts on “Views from the Blackhead Range”