The forecast kept me out of the mountains, I just didn’t have the heart to face freezing rain.  Where was Spring?

The next day dawned sunny, if not warm, so it was into the car and off to the north, time to get back to work on the Grid.  Along the way I noticed the sky was clear overhead, but cloudy along the horizon — upon reflection, it seemed this must always be the case, because when you look at a low angle, you see the mass of all those clouds and not the gaps between them.

Good spirits lasted for a little while until when cresting a rise on the highway, suddenly there were the Catskills right in front, with Plateau Mountain in particular stretching out as if with open arms to welcome, embrace, and crush me to pieces against its frosty white chest.  White not being the color of clear slopes and clean trails, like I’d been hoping for, but hardly a surprise, either, since the mountains create their own weather.

Pulling into the trailhead now, the valley socked in with a high cloud layer and snow dappling the ground…

END_OF_DOCUMENT_TOKEN_TO_BE_REPLACED

The Grid has turned into The Grind.  Last year I was busy with a high-pressure job, and every Catskills weekend was a chance to escape the office and leave behind the rigors of the corporate world.  What I recall most about last year’s mountain adventures is exhilaration and joy.  Now I’m between jobs and have all the time in the world.  But hiking in the mountains is morphing into work.

This is partly because of the commitment I’ve made to completing the Grid’s remaining ~100 peaks in 2018, rather than letting even a handful slip to next year.  The commitment is questionable, perhaps it’s insane, maybe I just haven’t freed myself of the sense of urgency and focus on results learned over a career in finance and before that the military.  In this regard, I am my own worst enemy.

The winter is also my enemy.  Someone inquired, if I was going to take some time off from the corporate world, why not do so during the summer, instead of the winter?  (The timing of these things is often outside ones control.)

True, the Mountains served up a gift in February, with the last few days of the month featuring beautiful warm temperatures, as high as 60 F, enough to melt most of the snow and let me scamper unhindered across the ridges.  But now it’s payback time:  March opened with two serious nor’easters, three to four feet of accumulated snow, and a return to freezing temperatures.

Half-way through the month, I’ve endured some of the toughest and most miserable hikes of my Catskills career, and while I’ve completed seven peaks so far, there are nine left to go.

And as I write this post, it’s snowing yet again….

But the worst enemy you can meet will always be yourself; you ambush yourself in caverns and forests.

END_OF_DOCUMENT_TOKEN_TO_BE_REPLACED

The mission was to complete the remaining twelve peaks needed to scratch the month of May off the Grid, and accordingly I arranged to take a week off of work.  But the Rock The Ridge 50-miler left me with a sore ankle, which required a reduction in speed and mileage.  In Henry David Thoreau’s essay, “Walking,” he used the word “saunter” to describe the act of sallying forth into the woods, which was for him the adventure and escape of his day, and he likened this daily saunter to the motion of a stream flowing downhill to the ocean:

The saunterer, in the good sense, is no more vagrant than the meandering river, which is all the while sedulously seeking the shortest course to the sea.

To complete the Grid for May, I’d need to saunter instead of run — and rather than pushing myself, I’d need to “flow” through the mountains, just like a stream, except I’d be going uphill as well as down…

END_OF_DOCUMENT_TOKEN_TO_BE_REPLACED

May in the Catskills

Driving north on the Thruway, I peered through the windshield, seeking a glimpse of the Catskill Mountains, curious how their appearance today would compare to past trips.  But a layer of clouds had spread across the sky and blocked the sun, and when the mountains’ southern escarpment finally came into view, it was just a dark gray wall beneath a gray horizon.  A dim and gloomy scene, with little contrast or detail, lacking energy, listless.  My heart sank.  Gone was the dazzling light I’d experienced in late December, when a fresh cover of snow and rime ice flashed brilliantly under clear skies.  Today it seemed better to sit by the fire, drink coffee, read a book — yet I was determined to climb several mountains this weekend, even if it was pitch black:  surely there would be something to see and feel. END_OF_DOCUMENT_TOKEN_TO_BE_REPLACED

Finding Energy in the Dark

Behind me the sky had colored with the rising sun, while to the front the southern escarpment of the Catskill Mountains was silhouetted in mauve and cerise. 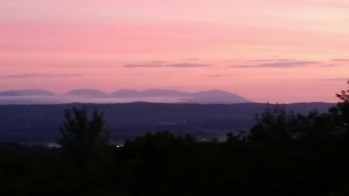 Odie and I were headed north for a minimalist adventure, the objective to climb three mountains, of which one would be a bushwhack.  The protocol for me would be climbing barefoot and descending in LUNA sandals; Odie is always barefoot.   Emboldened by slow but successful ascents of Peekamoose, Hunter, and Southwest Hunter, I had developed the peculiar ambition to climb all 35 peaks in the Catskills barefoot, and today’s activities would hopefully get me to number 6.

To make this expedition appropriately minimalist, I was carrying a small safety kit, but no food or water.

END_OF_DOCUMENT_TOKEN_TO_BE_REPLACED

Another Barefoot Adventure in the Catskills