Emboldened by success climbing to the Piz Boe Alpine Lodge barefoot, I resolved to tackle a mountain in the Catskills, despite the notoriously steep, rugged terrain and rocky trails.  Hesitant to take on this adventure alone, I recruited another barefoot runner to join me, namely Odie the Labradoodle.

Our destination would be the summit of Peekamoose Mountain, a 3,843-foot peak, which stands like a sentinel along the Catskills’ southern ramparts.   We left bright and early, having heard stories of congestion in the area.  One of America’s “best swimming holes” is situated on the Rondout Creek, whose source lies on the mountain’s shoulder.  This was once a local secret, but the word’s gotten out, and now on nice weekends crowds of visitors converge on the narrow road that leads to the Peekamoose trailhead.

We arrived around 8:30 AM and secured a parking spot, just a few seconds ahead of three carloads of visitors who were evidently bound for the swimming hole.  We didn’t hang around, but immediately headed up the steep trail, stepping over a couple bags of trash that hadn’t made it into a dumpster stationed nearby.  But after a few yards, all signs of civilization were left behind.

And now it was time for the sandals to come off — and for me to discover whether climbing a rocky mountain trail barefoot was really such a great idea.

The trail was indeed rocky, but I found the shoulder of the path was covered in dried leaves that had been ground into small particles, and this seemed like the most comfortable route to follow, for as long as it would last. 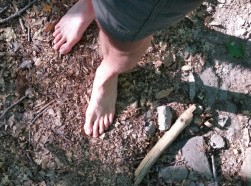 Odie had been up Peekamoose before, and he scampered ahead on the trail, alert for chipmunks, which he loves to chase.  The chipmunks kept their distance and chirped angrily at us from the bushes, unhappy to see interlopers menacing their neighborhood. 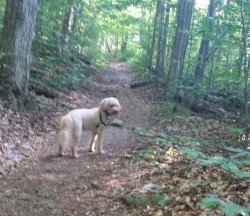 The path rose gradually along a former logging road.  In some places, the dried leaves provided a pleasant cushion, but in other places the trail was sprinkled with rocks or laced with roots.  Glancing at my GPS watch, I saw progress was very slow, ranging from 1 to 2 MPH, as I placed each foot carefully.  But that was fine.  I relaxed and enjoyed the morning.  Odie didn’t seem to be in any rush, either. 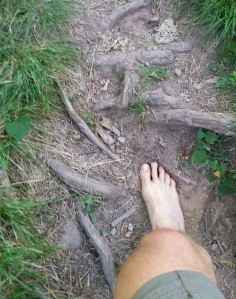 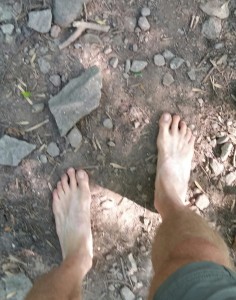 When you’re walking barefoot, you pay attention to each step and as a result you notice small details.  I soon discovered that the ground was covered with little dark berries.  But as I peered into the trees and bushes, I didn’t see anything growing.  The origin of the berries was a mystery. 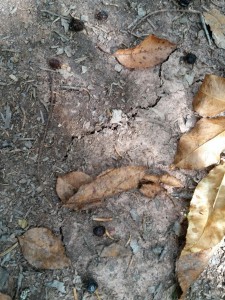 The trail to Peekamoose rises 2,500 feet over 3.5 miles for an average grade of almost 15%, but the mountain is shaped like a multi-layered wedding cake, with relatively flat sections interrupted every now and then with a scramble through a rocky outcropping or a steep climb up a dirt slope.  At one point, I had to help Odie up and over a rock ledge, and as for myself, each foot needed to be placed thoughtfully, because losing your balance or slipping is not a good idea when you’re walking bare foot. 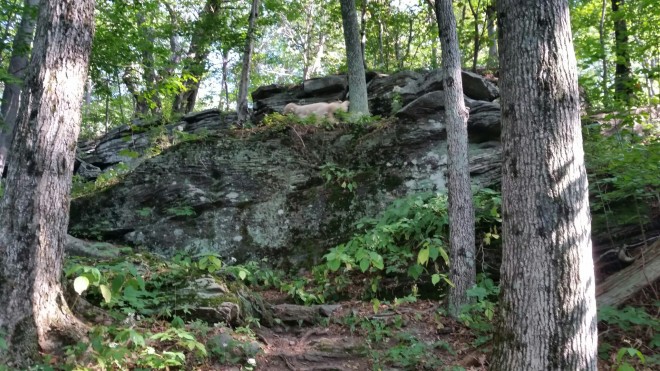 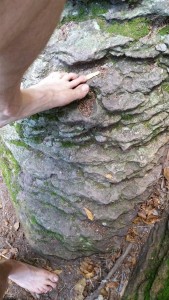 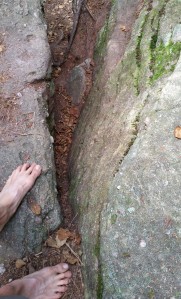 The GPS watch beeped as we passed mile three, which meant we were now within a half-mile of the summit with only three or four hundred feet of elevation gain to go.  Around a corner Odie discovered a glacial erratic perched on the edge of a large rock slab.  During the last Ice Age, roughly 20,000 years ago, most of New York was covered by the Laurentian Ice Sheet, which was several thousand feet thick.  As glaciers retreated back to sources in northern Canada, and as the ice melted out from under them, large boulders were deposited in random spots far removed from their points of origin. 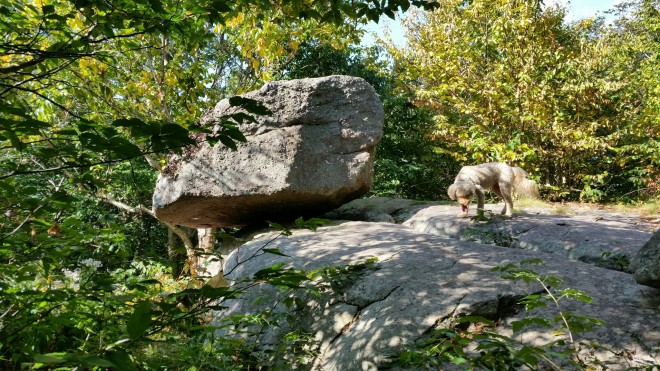 Here the surface of the path was covered in a fine grey sand with small white pebbles.  It reminded me of the path to the summit of Slide Mountain, which at 4,180 feet is the tallest peak in the Catskills, and thought to have been a nunatak or glacial island, its peak protruding from the surrounding ice sheets. 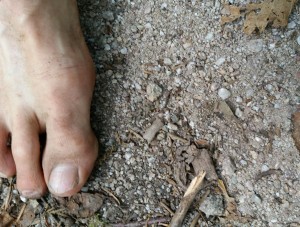 Another scramble and we found ourselves above 3,500 feet, leaving behind the beech, birch, and maple trees of the lower slopes and entering a thicket of fir and spruce, remnants of the boreal forests which covered New York after the last ice age and which are now largely found further north.  The path was covered in dried needles, broken branches, and moss-covered rocks.  In between the rocks, there was a treat for tired feet:  dark, cool mud!

Underneath the trees, the forest floor was carpeted in shining club moss (Huperzia lucidula).  During the Carboniferous period, some 360 million years ago, club moss relatives grew 100 feet tall.  But over the years, they couldn’t keep up with flowering trees that propagated through seeds (rather than spores), and today the club moss is vastly reduced in stature.  But it never gave up and continues to thrive to this day in the dim, cool, moist conditions of the boreal understory.

Finally, we arrived at the summit, which is marked by another glacial erratic.  A few yards off the trail, the brush has been cleared away revealing a gorgeous vista of the Ashokan Reservoir flanked by rolling green mountains.  It was time to kick back and admire the views.

Near the summit, I finally figured out the mystery of the berries.  They were from my old friend the Hobblebush, which on previous bushwhacking trips in the Catskills had managed to trip me up.  But now the Hobblebush didn’t seem as vigorous, with its leaves turning a bruised purple, as if its last energy for this season had gone into producing this crop of berries.  During one of his visits to the Maine woods, 19th century transcendentalist Henry David Thoreau tried eating hobblebush berries and reported they were “seedy and insipid.”  I’ve never been tempted.

Mission accomplished:  Odie and I had climbed Peekamoose barefoot.  Elapsed time was a leisurely 3 hours.  From his expression, Odie seemed to think he could have done it much quicker without me slowing him down.  He’s right about that.  But I carried his water.

On the way down, it was time to pick up the pace.  I put on my LUNA sandals and we made good time scampering down the trail.  As we neared the bottom, we heard the sounds of music, kids shouting, and traffic, and the smell of barbecue smoke hung in the air.  The parking area was hemmed in with vehicles, while people walked down the middle of the road carrying blankets, folding chairs, and bags of food, ignoring the cars.  A pair of rangers was trying to direct traffic.

Odie and I got out of there quickly.  Crowds, noise, and trash isn’t our idea of how to enjoy the outdoors, and from what I read, the locals don’t appreciate these visitors, either.  Having said that, these people are responding to the call of the mountains in their own way.  Odie and I will leave it to the authorities to establish order, we’ve got the rest of the Catskills to explore, both barefoot and (for me) in sandals and shoes. 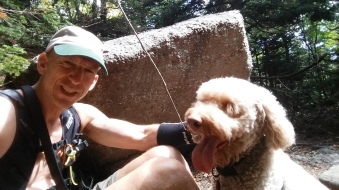 Author’s note:  on a subsequent trip to Peekamoose a year later, I noticed once again the small dark berries littering the trail, but when I looked around, there was no hobblebush to be seen anywhere in the vicinity.  Looking around me, I couldn’t see any source of the berries in the underbrush or the trees.  But then, I realized that the cherry trees grew so tall, that the leaves weren’t even visible from the ground — and that observation solved the mystery.  The thesis was confirmed when I inspected a shorter cherry tree growing higher up the mountain and saw the ripe cherries growing among its leaves. 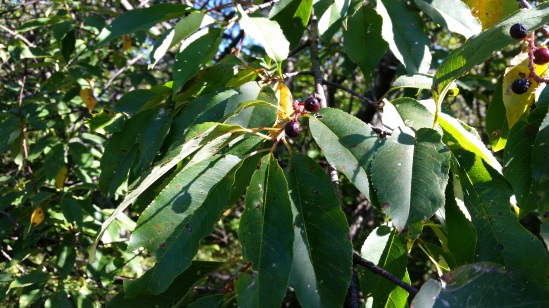 Also, since the first post, the DEC has cracked down on crowds and inappropriate behavior at the Peekamoose Blue Hole.  After my hike was over, I strolled over to the swimming hole and found a small number of well-behaved persons enjoying the cool water on a beautiful late summer afternoon.  It is certainly a beautiful spot.