With a trip to the Grand Canyon on the horizon, the question is how to prepare for the big 4,000-foot descent from the rim to the Colorado River — and the big 4,000-foot climb back up.  An idea comes to mind:  hike the highest peak in the northeast, New Hampshire’s 6,289-foot Mt. Washington.

While studying the map, this idea morphs and expands and eventually crystallizes into a plan to hike the Presidential Traverse, a 23-mile crossing of the enormous exposed granite ridgeline that features Mt. Washington and nine neighboring peaks.  Memories surface from August 2004, when I’d completed the Traverse with my friend Andy and his wife Erin: we’d had a great time, except for the final descent through an unrelenting field of rocks.

It’s thirteen years and eleven months later as once again I pull into the AMC Highland Center in Crawford Notch, after a six-hour drive from New York.  It’s a struggle getting out of the car, thanks to an inflamed piriformis (a muscle in the butt) — the result of too many squats earlier in the week.  As I hobble across the parking lot the other issue weighing on my mind is the weather.  I’ve been watching the forecast steadily deteriorate over the last few days, until it now calls for “Thunderstorm” with 100% probability of precipitation and winds from the west at 37 MPH. . . .

Not remembering many specifics from the 2004 experience, I called the Appalachian Mountain Club, took their advice to hike north-to-south, and booked a reservation at Lakes of the Clouds Hut in the middle of the traverse.  Once this plan was established, I plotted the route on my laptop and then downloaded the track and two map layers onto my phone, which I’d carry in a water-proof case with a battery charger in the pack.  Then it was back to the laptop to study each leg of the route and the surrounding terrain, memorizing as much detail as possible.

On reaching Crawford Notch, however, I rethink these plans.  Since the weather looks bad day one, but is expected to clear on day two, why not start in the south, where the route is shorter and less exposed.  And so I head out after breakfast with the goal of reaching the Lakes of the Clouds Hut, about 9.5 miles in from the Crawford Notch trailhead and 3,000 feet up, before the thunderstorm arrives mid-afternoon with what are now expected to be 60 MPH gusts.

The first couple of miles to Mt. Webster are straight up the side of a hill on a steep rock-strewn trail .  I move slowly along the path, admiring the red spruce, Balsam fir, and paper birch, but feeling a little tentative.

A mile later, Mt. Jackson offers more misty views and a few sprinkles.  A spruce grouse scurries down the trail, a black chicken-sized bird with white markings and a red spot on the head.  A small clearing with clumps of reindeer lichen, and under foot the diminutive white flowers of the three-toothed cinquefoil.

From Jackson, a glimpse of the enormous ridge rolling off into the north, for the most part cloaked in boreal spruce-fir forest, but the ridge crest (where the trail goes) is barren and exposed.

It’s drizzling.  My pants are wet from brushing against spruce branches.  A sign asks hikers to avoid crushing the delicate vegetation that lives in the alpine zone.  I’m not wearing heavy boots with sharp-edged treads, but all the same, I make a point to step with care and respect the rights of the “plant people” (as John Muir might’ve called them) who enjoy protected status here.

Actually, I pose comparatively little threat to the vegetation because I’m not wearing shoes (my practice in recent years), so the plants are pretty safe.  The real question is how my soles will do on a path that consists of a little dirt in some places, abundant gravel, piles of gray-orange granite, and an occasional chunk of quartz.

The drizzle comes and goes.  Cresting a small hill I’m delighted to catch sight of Mitzpah Hut, nestled against the southern flank of Mt. Pierce.  Once inside, I learn that the hut leader although mindful of the weather has nonetheless sent his team out on the ridge carrying supplies.  We discuss contingency plans in case of lightning:  in theory one would like to get off the ridge, but unless you’re at a trail junction, you’d have to push a long ways through waist-high spruce — probably better to keep moving, unless the bolts are striking at your heels.  Thunder cells are now expected to reach the ridge between 2:00 and 4:00 PM, with gusts up to 100 MPH.  My watch shows 11:30 AM.  I move out with a sense of urgency.  Thunder rumbles overhead twice.

I don’t pause on Pierce but keep moving toward Eisenhower, whose bald dome looms ahead.  Upon reaching the summit cairn, two miles to go.

The rain’s steady, but not heavy.  Marching along I ignore all sorts of interesting lichens and alpine flowers (no time to admire them).  A gray-cheeked thrush sings from the top of a short spruce tree.  A small toad hops across the trail.

Nearing Mt. Monroe, a glimpse of Mt. Washington, sheets of mist blowing through the towers and instruments clustered upon the summit.  That will be tomorrow’s business, meanwhile there’s only a mile left to Lakes of the Clouds.  Thunder rumbles overhead. 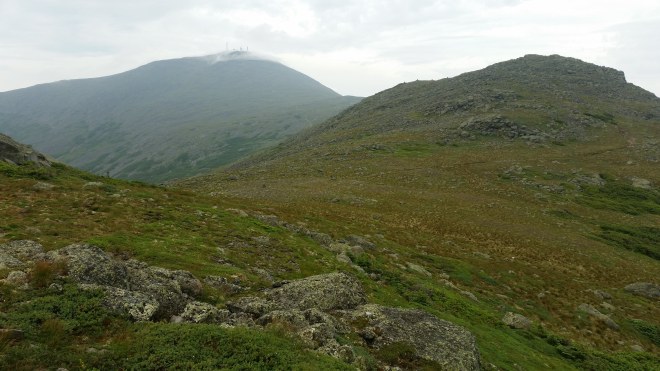 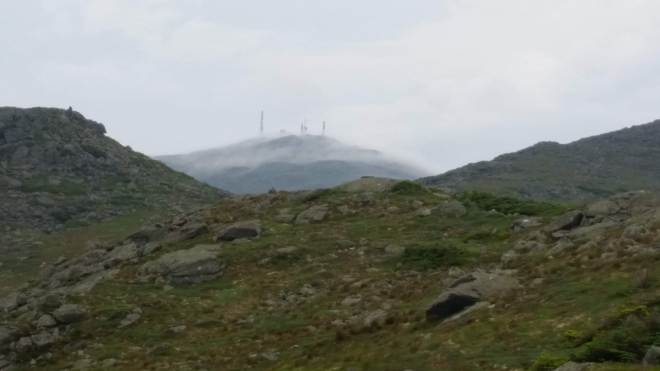 Finally the Lakes of the Clouds Hut down below! 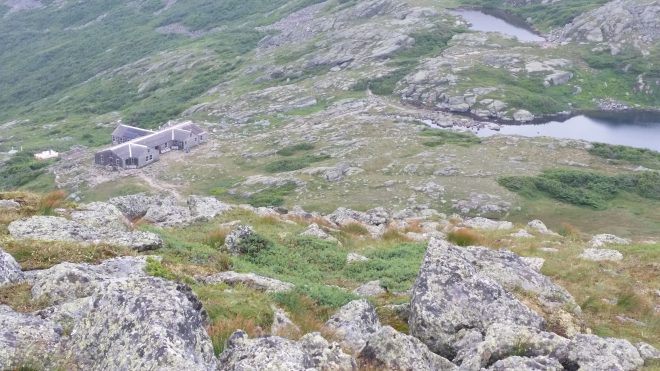 I’m safe inside, map spread out on a table, studying tomorrow’s route, as heavy rain moves in.  The forecast for tomorrow looks better, but I’ve got a longer distance to go and a taxi waiting for me at 5:00 PM at the northern trailhead, so I’ll need to get an early start.  Right before dinner, an orange glow lights up the western horizon.  But then the fog moves back in, and the wind howls all night long.

I’m up at 5:00 AM only to find clouds thundering past the windows.  Drops of water roll off the roof and dance about in the flow.  I decide to wait for the crew’s weather update at breakfast (although this will cost me two hours):  they’re expecting the sun to come out later this morning, but it will stay cold and windy for much of the day, with sustained 50-mph winds, mid-40’s temperatures, and windchill below freezing.  They’re not going to carry loads down from the summit this morning, but they don’t discourage us from heading out.  I stand up from the breakfast table and stride out the door, already wearing goretex top and bottom, wool long underwear top and bottom, a fleece sweater, and a knit cap.  My pack is probably the smallest and lightest in the hut, but I don’t skimp on layers.

I head out into the howling gloom and step up toward the summit through a field of rocks.

The summit slowly draws near, flickering in and out of vision as sheets of vapor race by.  The ~1,200-foot climb to the summit goes quickly, with legs feeling strong and feet fine, which bodes well for the Grand Canyon.  But first I’ve got to complete the Traverse.

It is indeed windy at the summit.  I’m staggering in the gusts, trying not to lose my balance.

Descending Washington’s northern flank, I find the granite boulders are covered in sharp wavy edges.  This is slow and a little painful.

I move purposefully across Mt. Clay, where before me the great ridge rolls off to the north, with Jefferson, Adams, and Madison like breaking waves.

Toiling up Jefferson, I glance up at vapors streaming across the summit.  With the sun out, the goretex is back in my pack, and the fleece sweater comes off and goes back on depending on wind and grade — mild discomfort is part of the game, but sweating is not allowed, nor is shivering.

From Jefferson, a torturous descent through piles of rubble.  A look back at Mt. Washington, with the cog railway visible on the right (one of the trains inching along and belching black smoke) and the auto road on the left.  Once upon a time, a college friend and I climbed Mt. Washington during the winter.  Mindful of avalanche risk, we asked ourselves, what route offered the easiest grade?  We ended up walking along the snow-covered auto route all the way to the top. 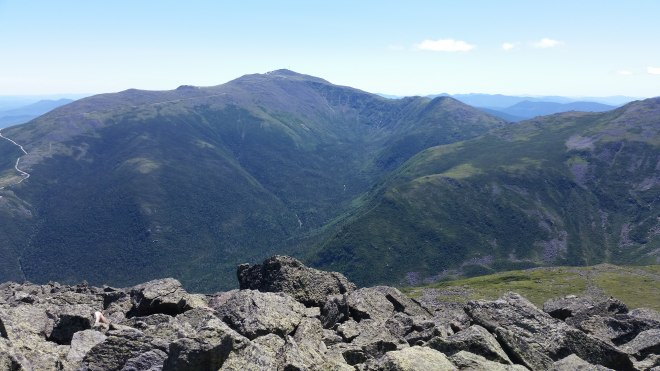 The climb to Mt. Adams passes through a point on the map labeled “Thunderstorm Junction,” and here cold winds catch me once again.  My momentum is starting to fade.  When hiking barefoot on sharp-edged granite rocks, every step requires total concentration and perfect balance.  But now my focus is wavering.  No choice but to declare “condition red”:  according to this procedure, each time a foot scuffs a rock, my weight shifts unexpectedly, a stone tilts underfoot, this gets counted as a “warning.”  After six warnings, a “time out” is mandated:  drink some water, look at the map, take ten deep breaths. 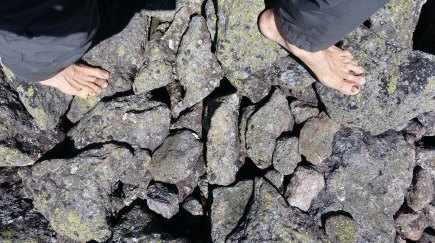 At this slower and more controlled pace, Mt. Adams’ summit is eventually reached.  The panorama is spectacular, but the watch shows it’s getting late.  After roughly fifteen miles barefoot, it’s time for shoes.

Not surprisingly, shoes make a difference on this terrain.  Airline Trail is a perhaps the worst section yet — (possibly the grim descent I’d recalled from the 2004 trip) but now with good grip and protection, I step and hop down with great confidence and trot a few steps when the trail finally levels out, arriving in due course at Madison Spring Hut a little after 2:00 PM.

Madison’s summit seems so close!  And it’s such a glorious sunny day!  And wouldn’t it be cool to complete the entire traverse!  I drink a cup of tea while pondering alternatives.  But the taxi reservation is a commitment which must be honored.

Down onto Valley Way trail, 3.8 miles and 3,500 feet to the bottom, pausing to shed wool underwear, then stripping off shirt and running on a soft dirt path through deciduous forest rustling in a dry breeze.  I slow to a walk for the last mile, reaching trailhead and taxi at 4:50 PM.