With the Coronavirus pandemic sweeping the country, it was no surprise that the races I’d signed up for were all canceled.  However, one of the organizers offered up a “virtual” option, allowing you to run the distance you’d signed up for, in whatever location you happened to be, within a few weeks of the event date.  At first I dismissed this as a pointless exercise.  But after a week of sheltering at home, I was eager to get outside and cover some miles.  So I picked Saturday morning to execute the virtual option, deciding to run my marathon at a local university track.

I’d set the alarm for 6 AM, but woke up earlier.  With rain in the forecast, it seemed a good idea to get going.

A cup of espresso later (no breakfast though), it was out the door and into the car, and on the drive over to the track I was startled by the deep yellow light welling up between eastern hills, underneath the dark cloud ceiling.

As I reached the track and began my run, dawn’s colors persisted, now a band of cherry  light glowing behind the campus buildings and then a minute later flaring yellow and orange against the clouds’ underbellies.

The track is situated on the shoulder of a long ridge outside the town of New Paltz, NY.  To the north, there are views of the southern escarpment of the Catskills, with Sugarloaf, Twin Mountain, and Kaaterskill High Peak prominent this morning under yellow-streaked clouds, while pink light lit up the western slopes of the Shawangunk Mountains in early morning alpenglow. 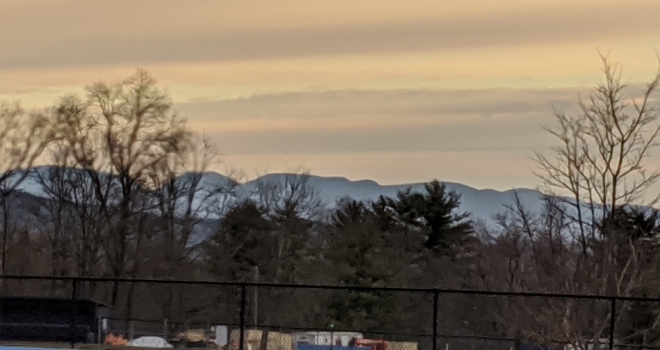 I started running a little after 6:30 AM upon an empty track.  I was alone with that familiar sense of dread I sometimes feel when starting something that will take a large amount of effort.  All bundled up against the morning chill, I focused on reaching mile one, while my feet got used to the gritty surface of the light blue track that would be my little world for the next few hours.

A man dressed in a dark navy parka entered the track, walked once or twice around, and left.  I turned my attention back to the morning sky, where conditions were changing subtly as the sun rose a little higher in the murky sky.  For a moment the sun lit up a series of wavy clouds, and briefly I saw my shadow.  But thick stratus layers kept pushing in from the west.  The sun shrank from view.  The cloud waves merged together, turned featureless, spread across the sky until everything was uniformly gray.

An elderly Asian woman entered the track.  She was wearing light blue pants, white sneakers, a thick beige jacket, and a tan knit cap decorated with a brown pattern.  She was bent forward slightly at the waist, her right arm swinging while the left was stationary, and with each step the tip of her cap described a small oval (the end result, I surmised, of shock waves entering at the heel).  She walked briskly for a few laps, paused to take a drink from a bottle, then resumed in the opposite direction.

I, too, switched directions, having completed 7 miles counterclockwise, which is the standard direction of movement at the track — but there was no-one else out here to run into, except for the Asian woman, who kept to the outside lane, while I ran on the inside.

In due course she exited the track.  I turned my attention back to the sky.  There were discrete, low-lying cloud formations with highly-textured patterns that appeared from time to time, rolling off the Shawangunk Mountains’ upper clifftops or forming spontaneously to the southwest.  Sometimes these clouds were lighter than the prevailing gray ceiling, and sometimes they were darker, and I could not figure out why the colors varied, or for that matter how these patterns came into being.

I was running a virtual marathon, which was equivalent to approximately 105 laps on this quarter-mile track, but there was no point in counting, since I had a GPS watch to track distance.   My mind was free to roam, and my eyes to dart around in search of interesting sights — like a Ford Mustang convertible, parked in a lot across the way, in a striking shade of pale orange. 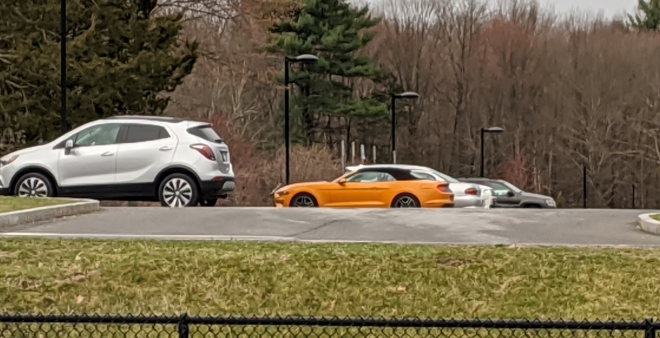 Each time I circled the track, I glanced up at that splash of orange, eventually becoming a little anxious that another vehicle might enter the lot and obstruct my view.  Indeed, another car did enter the lot (it was a dull gray color).  The driver backed it carefully into a spot, on the far side of the orange Mustang.

As I continued to circle the track, I became conscious of other spots of orange.  Tall orange posts delineated the outfield for a baseball diamond.  Orange traffic safety cones were scattered about.  For several laps I stared at an ancient scoreboard, blue with orange letters and numbers, until I realized these were the university’s colors, which also decorated a small truck and were emblazoned in the center of the infield.  A short orange string was tied to a fence post.  A small bit of torn orange fabric was lying on the ground.  A runner passed by outside, wearing a gray jacket with orange piping on chest and sleeves.  In the parking lot, a sign indicated a spot for the resident director, and the top of the sign was marked with the word “RESERVED” and a bright orange stripe.

Nearing mile 15, I was running well, soles feeling comfortable on the track, legs starting to feel a little fatigue, but still fresh enough to keep a steady pace.  I’d started out bundled up for 40 F temperatures, but having warmed up now I was running in shorts and t-shirt.  A woman entered the track and said “Good morning.”  Noticing my bare feet, she commented, “That’s brave.”  She walked around talking on her phone incessantly.

Having exhausted all signs of orange in the surroundings, I turned my attention to the bits of debris lying on or around the track:  a northern red maple leaf, an eastern white pine fascicle with three needles, a small tube of lip balm, a cigarette butt.  The blue surface of the track had deteriorated in places, and blue particles were scattered across the surface of the AstroTurf infield.  Conversely, some kind of crumbly material underlying the artificial grass had produced a scattering of black particles upon the blue track surface.  There were also a few small clods of dirt, which must have been tracked in from the surrounding fields, as well as a couple of twigs and some hair rings in black and brown.

The light blue track had become my universe.  Sometimes I looked at the sky to see how the clouds were changing, and sometimes I observed my neighbors or the vehicles parked or passing nearby.  But when I glanced down, there was a whole world of light blue.  In some places the blue surface had become worn, exposing a lighter color underneath. 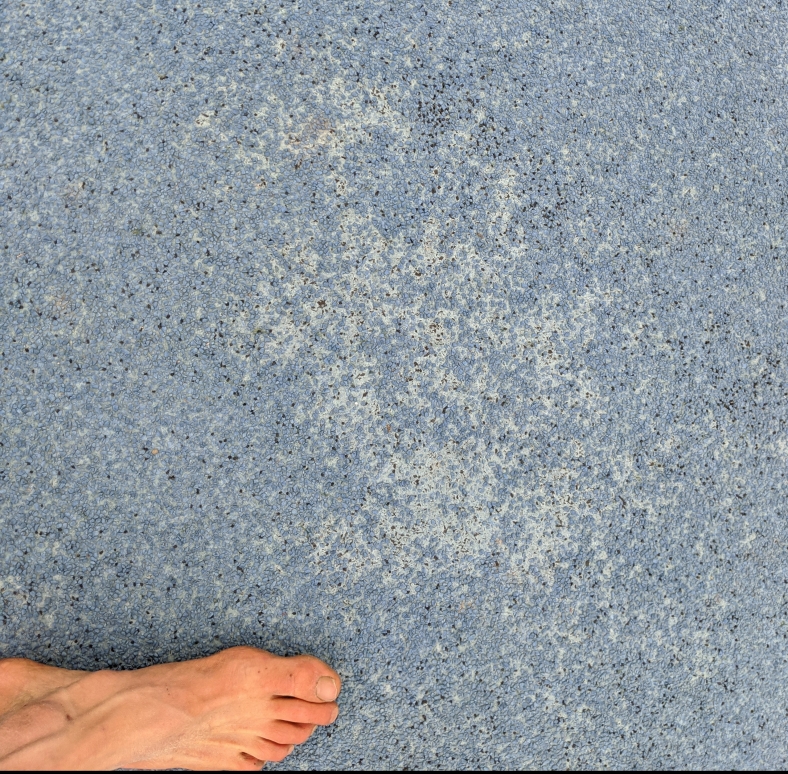 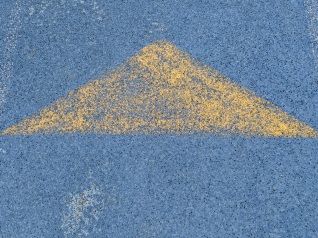 This will not come as a surprise to anyone who’s run track, but I gradually noticed the surface was covered with signs:  numbers, arrows, lines, and little cross-hatches painted in different colors.  The southern side of track was highly worn — even the white lines separating the lanes faded out in places.  I thought this might be from the hard force of sprinters’ footfalls, as the 100-meter dash was situated here.  Then it occurred to me that everyone entered the track from this side — not only runners and walkers, but also teams come to play in the infield (football, soccer, lacrosse) — so there was likely a lot more foot traffic.  Whereas the other side of the track opened onto some fields that saw little more than an occasional dog walker.

I might have continued studying the track (for there a bewildering array of marks in yellow, white, red, and green), but now that it was a little later in the morning, more people were around.  There were several walkers, including a middle-aged man wearing white sneakers, jeans, a black hoody, and a red cap.  He strode forward swinging arms vigorously.  An elderly couple entered the track.  They were bent over at the waist, like the Asian woman I’d seen earlier, and also hunched at the shoulders.  They shuffled along slowly for a couple of laps and departed.

A group of five exercisers showed up, one wearing a sweatshirt that read “Mid-Hudson Crossfit.”  They tossed medicine balls against a nearby wall or slammed them against the ground or rotated them back and forth while in crunch positions (“Russian twists”).  They jumped rope, swung kettlebells, and ran an easy lap or two.

Two girls were with them, the younger one around five years old I guessed, wearing a yellow rain jacket and jumping with a pink rope.  “That man’s not wearing shoes!” she called out as I passed by.  (“Yes, he’s the same man we saw before,” her sister explained.)  Later on, the girls jogged around the track, taking breaks to walk and then hop over the yellow lines and arrows.

Two college kids appeared, the young man dressed in black tights and hoodie and knit cap, all emblazoned with the Nike swoop.  His girl friend’s sweat clothes had 3 thin stripes running down her legs from waist to ankle and the same stripes from shoulder to wrist.  I saw them doing planks and dips against a bench, but mostly they lounged around and talked.

I reached mile 20 and 21 and 22, running steadily and a little bit faster, the soft track feeling comfortable underfoot, shirt now stripped off to stay cool, breathing a little harder.  I paid attention to the outside edge of my right foot, where a little bruise had appeared after my last marathon run, and to the inside of my left ankle, where I’d strained a tendon a few years back.

Eventually I finished.  On the drive home, a few raindrops sprinkled against the windshield.

Running the Long Path is my account of a 350-mile run in pursuit of a fastest known time record and what I discovered along the way.  (Click on the image for more info)

One thought on “A Virtual Marathon”