The pleasure and value of every walk or journey we take may be doubled to us by carefully noting down the impression it makes upon us….It was not till after I got home that I really went to Maine, or to the Adirondacks, or to Canada.  Out of the chaotic and nebulous impressions which these expeditions gave me, I evolved the real experience.  There is hardly anything that does not become much more in the telling than in the thinking or in the feeling.

This hike consisted of bagging Doubletop and Big Indian, which incidentally brings me to 49 out of 420 for my second Catskills Grid.  While another grid is not an immediate goal, it feels like slow progress in that direction would be a way to learn more about these beautiful mountains and thus worth a little bit of time and effort…

I arrive at the Seager trailhead to find a group in the parking lot gathered around their leader, who’s giving a lengthy briefing.  No peaks for them today, the leader explains in response to my query:  this group is from the City, and the plan is to take it easy.  Where?  At the “swimming hole” – which is the first time I’ve heard it referred to as such — that bend in the Dry Brook where the water cascades over a sandstone ledge and pools in a shadowed basin.

That pool is an inviting prospect, indeed it’s a magical spot, the kind of place I joke where you might expect to find a nymph, and I’m sympathetic to the group’s plan.  But with peaks to climb, there’s no time to hang out, and so I stride out along the trail, admiring the vegetation crowding the path (snakeroot, waist-high nettle, orange jewelweed, clouds of sky blue aster) as I leave the group behind.

After a short distance, I notice two small dogs are trailing me.  A few barks, as if to keep me in line, and now they’re scampering ahead.  But they come back.  When we reach the pool, they venture out to inspect the water, then pause and lift their ears….a moment later, they’re racing back the way we came.  A short time later the group’s vanguard appears through the trees. 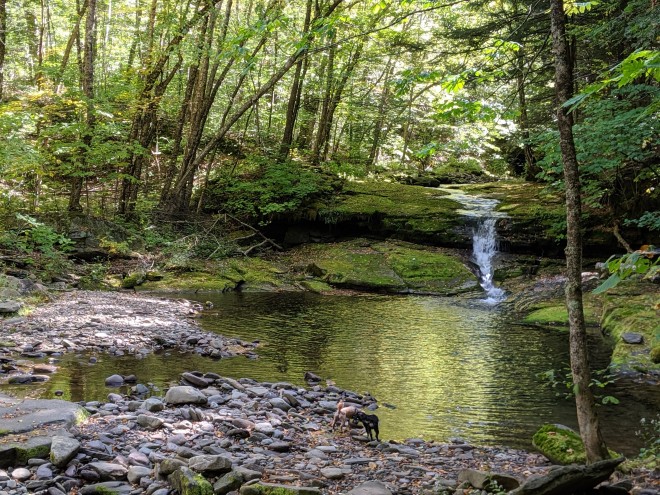 The pool is such a peaceful spot, it’d be tempting to hang out (which is how I feel every time I’m here), but the peaks are calling, and it’s only a few steps farther to the familiar turn-off to Doubletop:  an unmarked footpath but easy to follow, it might as well have been etched in the forest floor, such is the cumulative impact of a summer’s worth of Vibram soles.  (In a few weeks the path will disappear beneath an accumulation of fallen leaves and later on of snow, and then next spring it will appear again.)

The path heads up a steep embankment through a grove of tall hemlocks, levels off, rises steadily through green clouds of beech and birch, reaches a series of ledges, winds between the slabs, and clambers up into the boreal zone through tangles of fir and spruce, until finally the summit canister appears.

I write my name and the date on the canister logbook, thinking back to a fall visit a year or two ago, when I’d sat here for a little while and watched the tussock caterpillars squirming by — but not today:  I’m in the mood to keep moving.  So I head east-north-east across the summit, smelling the sweet scent of spruce baking in the sun, stepping on moss and club moss and feeling dry earth covered in needles and twigs, and then there’s a damp patch with pale green mounds of peat moss.

Now exiting the boreal zone, dropping downhill through tangled branches and stems, weaving through slabs, constantly scanning ahead for the best line down the slope, while keeping the sun on my right to stay on course (and checking the compass, too, since small errors heading downhill can become very costly).  Ahead through the trees, hints of Big Indian:  light shining through the foliage where the mountain’s shoulders slope away, and then straight ahead through a gap in the leaves a glimpse of a jagged line of spiky fir, which mark the mountain’s summit.

Almost to the saddle, here’s a familiar screen of fir, and a small opening where the forest floor is carpeted in blueberry heather and gray reindeer lichen, familiar from a past visit (how surprised I’d been to find this strange opening), and a few more fir trees before I emerge from the tangles to find a shallow groove in the terrain, the southern edge of the saddle.  I step across, look for the northern side, but the vegetation’s too dense.

Starting the ascent toward Big Indian, I make a point to steer around to the north to avoid a line of fir-entangled ledges, while scanning once again for the best route through the woods, that is the lines that avoid ledges, big fallen trees, rocks, stands of hobblebush, slanted terrain.  Keeping to the northern edge of the ridge, I bypass a small knob (no need to climb it), dip down and then back up again – and just like the last time here, the last few yards to reach the trail seems endless.  An unmarked path appears on the forest floor, and this is very much appreciated, but then it disappears, forcing me to muscle my way through fir branches.  I regain the path and lose it again, and still the trail’s not here.  I’m fretting with impatience, which is how I felt last time, too.

But the trail does eventually show up, just as it did on my last visit, and in the same location.  Free from the tangles, I pick up a slow jog on the soft dirt and then turn into the woods and charge up to the top of Big Indian, where two hikers are hanging out, having signed in at the canister with their trail names, Sleeping Beaver and Icepick.

Back on the trail, I try to run, but the smooth dirt has morphed into tumbles of rocks, and hopping from rock point to rock point begins to bother my ankle, so I slow to a walk.  The trail junction is a long time in coming.  I was going to climb Eagle, too, which is only a mile distant, but time is running out.  Eagle will have to wait for another day.

On the descent, the trail hugs the side of the ridge, while down below me and on the left lies the source of the Shandaken Creek, and beyond it the ridge to Doubletop I’d climbed this morning.  Past the Shandaken lean-to, a few hops and jumps across the Dry Brook, and a little while later I’m back at the pool.

It’s late afternoon.  Behind the pool, the forests are radiant in the slanting sunlight, while the pool and this side of the valley lie in shadow.  The brook curls past a rocky shore with a patch of gray sand and then disappears around a sharp bend, where the eroded clay exposes sharp-edged sandstone strata. From here the Dry Brook flows a few miles to the town of Arkville, joins the East Branch of the Delaware River, empties into the Pepacton Reservoir, and many miles later makes its way to the Atlantic Ocean.

I saunter down to the gray sand and stand for a moment in the water, but the cold burns my feet, so I retreat to a comfortable flat rock where I sit and study the scene.  The water cascades over a dark slab and then pours through a notch.  I recall how last winter the water had been thundering across the slab and spurting through the notch with great force.

After some consideration, I decide to try the pool again: I stagger in to my knees on the slippery rocks, splash out into the water, which is shockingly cold, and immediately turn about and flounder back onto the shore and crawl back to the flat rock.  My body is rushing with heat in response to the shock.

How interesting to find this placid-looking pool packs a little zap! It’s a reminder that nature doesn’t care about our preconceptions, which is part of what makes these forest experiences so refreshingly intense.

It’s time to head back.  An easy stroll back the last mile, past those clouds of sky blue asters, standing out even as the light fades.

Notes from the Catskills

3 thoughts on “Notes from the Catskills”