The plan was to run intervals at the track, but it rained during the night, and the morning was cool, damp, misty, cloudy…in a word, uninspiring.  A day crying out to be spent indoors, with plenty of coffee, at work on important tasks.  But of these I had none.  I sat on the sofa, looked out the window, and struggled to come up with a plan to make the day productive.

The irony is, having taken time off from the corporate world….here I am sitting around with time on my hands.  Perhaps I’m suffering from a touch of “Griditis,” a state of fatigue associated with excessive peak-bagging activities.

Further weighing on my state of mind:  a pair of young ultra-runners is out on the Long Path attempting to thru-run the 358-mile trail in 7 days, which would soundly break the current record — which is my record.

I pull up their SPOT track on my laptop and see they are on the move in the Catskills, heading down from North-South Lake Campground toward Kaaterskill High Peak.  Now an idea occurs to me:  I could drive up there, meet them on the trail and cheer them on — and then climb Kaaterskill, scratching it off the list for the June Grid.

The only question, can I face such a grim mountain on such a glum day?

Now that I’m in the car and on the move, at least I have the road to focus on and the scenery to distract me, although the morning remains uninspiring.  The Shawangunk Mountains are thoroughly obscured from top to bottom, indeed clouds are licking at the valley floor.  The Catskills are totally hidden.

Upon arrival at the Platte Clove parking area, the scene is gray, misty, cold.  The surly side of June.  Fleece sweater goes on top of wool shirt, and reluctantly I emerge from the car and set foot onto a cold muddy rocky road that heads straight up.

Once moving, however, my mood improves.  It’s an easy walk through the misty forest along the muddy road, with familiar bird calls ringing out, including oven birds, red-eyed vireos, and black-throated blue warblers.  After a mile or so the trail turns off the road, crosses some wooden bridges and bogwalks, and narrows to a footpath.

At 2,500 feet in elevation (500 feet above the parking area), a signal gets through to my phone and updates the SPOT map:  the two runners are just ahead.  And a moment later, here they come shuffling down the trail, Will Fortin of New York and his friend Dustin Smith of Boston, moving purposefully, carrying on a spirited conversation. 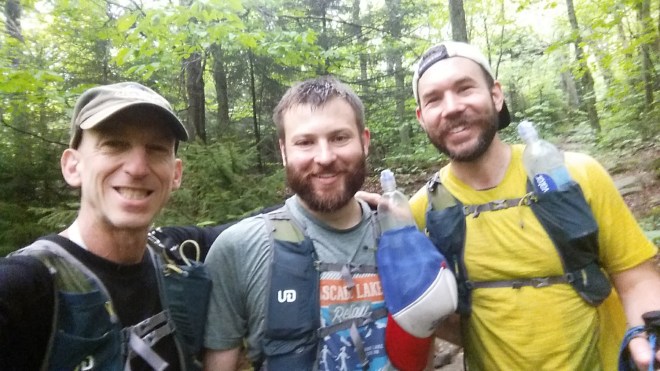 I learn they got a cold start this morning (45 F and raining) but that otherwise they’re feeling good (and most importantly, their feet are in great shape) and hoping to reach Phoenicia this evening.  I remind them to be thoughtful on the Devil’s Path (lest they antagonize the forces of darkness), but they’ve been there before and have already anticipated some of today’s likely challenges, such as slick rocks.

The clock’s ticking on their record-breaking attempt, and not wanting to hold them up, I wish them the best and send them on their way.

That accomplishes the first part of my mission.  Now it’s time to scratch Kaaterskill High Peak off the June Grid.  This will be my ninth time climbing the mountain, which is not my favorite on account of the soupy trails that circle its shoulders and the steep summit scrambles which turn dangerous in the winter.

From the point where I met Will and Dustin, it’s a half-mile to the turn-off to the summit scramble, but this is precisely where the trail falls apart and becomes something of a nightmare:  heavily washed out, long stretches of mud, and then pools of standing water which in some places renders the trail indistinguishable from a streambed.  For a barefoot hiker, getting wet and dirty isn’t the problem, rather, the challenge is akin to navigating an obstacle course:  keeping your balance on slippery rocks, sinking into ankle-deep mud, clambering over fallen branches, stepping across gnarly roots.

The half-mile is slow and difficult, but it eventually comes to an end, and I turn uphill, reach another intersection and look around for the path to the summit.  Except I don’t see it.  So I march straight into the forest — there being no question as to which way is up — only to find myself walking barefoot through a field of stinging nettles.  The map on my phone shows the path off slightly to the right, so I angle off in this direction, pushing aside some hobble bush and stepping daintily between bristling nettle leaves and stems.  A dry stream bed appears — could this be the path? — but no, it’s choked with fallen branches — just a few steps further and here it is, mercifully clear of vegetation.

It’s time for the scramble.  In the winter, it’s quite dangerous, indeed people have slipped, fallen and gotten injured here.  I recall past visits:  climbing ice-slicked rocks wearing spikes or crampons, clumping up in snowshoes, getting caught in freezing rain, climbing up while streams of water cascade down the rocks.  But today, the climb’s easy: I charge upwards, pull myself up three or four sandstone ledges, and am soon striding across the summit, which is a small clearing in the shadowy fir-spruce forest.

I keep following the trail over to the summit’s southern side.  A few patches of Dwarf Dogwood (or Bunchberry) are creeping along the ground, the flowers distinguished by four-pointed white crosses arrayed against smooth, parallel-veined green whorls of six.

The path takes me south to Hurricane Ledge and its expansive views across high plateau and mountain valley.  But the scene today is quite different from the sunny landscapes of prior visits, for today is a drama of clouds in motion.  To the west:  a high ceiling of heavy white and gray, in transit a thousand feet above the peaks.  To the east: a huge white low-lying mass has worked its way up into the mountains through the Kaaterskill gorge, and is now releasing thin gray tendrils which snake slowly upwards.  Suddenly the white mass erupts:  a huge column shoots thousands of feet into the air, as if it were being sucked along by the higher cloud layers in transit from the west. 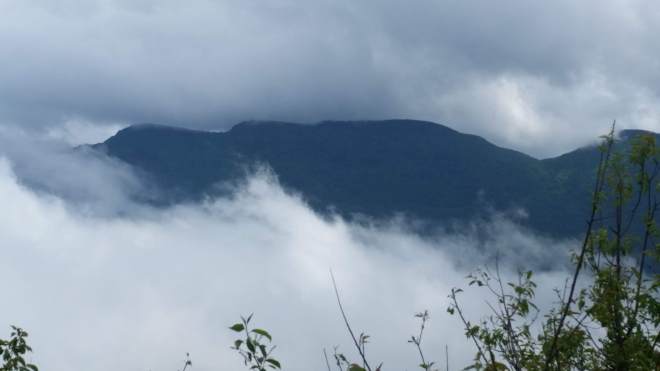 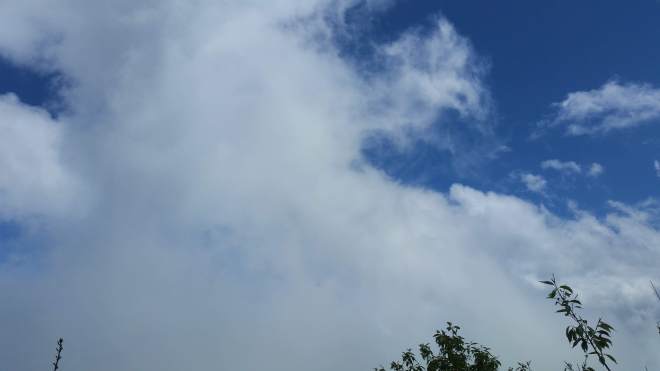 My knowledge of such things is limited, but I suppose that as the winds move across the mountains’ eastern rampart and the ground drops away two thousand feet to the Hudson River, a sort of rotational backwash is produced that sucks low-lying vapors into the mountains and then drags these freshly-created clouds up into the sky.

After watching clouds for a while, I turn to inventorying the vegetation growing around Hurricane Ledge.  There are healthy balsam fir trees with fresh young light-colored shoots growing out from branch-tips; a couple of spruce trees which look healthy and presumably are growing, too, but their branch-tips lack that light color; plenty of black cherry trees; an oak; paper and black birch (the latter with a strong wintergreen scent when you break off a twig); berry canes; and a small mystery tree with smooth dark bark with white spots, lance-shaped leaves with jagged margins and parallel veins, four-petaled white flowers, and small pink fruits.

Time to get going, but I don’t care to face the mud-zone again, so I drop down Kaaterskill’s southern scramble, where I come face-to-face with a beautiful pinxterbloom azalea bush still in bloom.

The trail is very steep, and the going slow, but eventually the path leads to a junction marked with a large and elaborate cairn.

And now the path proceeds to take me through an ocean of stinging nettles –and while I’m safe on the path itself — fallen trees and branches of all sizes crisscross the trail, forcing detours into the nettle zone.  Dangerous!  But no stings are incurred.  The map designates this as an “unmaintained” trail, and after grumbling to myself about the mess, I drag a few of the smaller branches off the trail and throw them into the nettles, that being my contribution to the world for today.

The nettles are mixed with Indian Hellebore, patches of Hobble Bush, and some jewel weed.  A rotting log is covered in Mycena mushrooms whose orange color has faded. 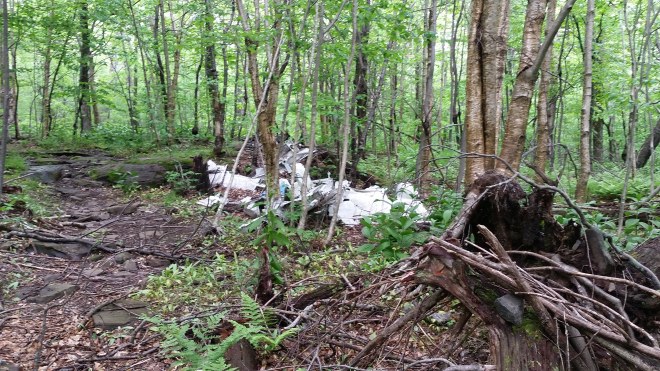 It’s time to bushwhack a short distance through the woods to reach the trail I first came up, and evidently I’m not the first one to take this route, because I discover a fire pit in a dark hemlock grove and then an unmarked path that takes me to the trail.

Then it’s back down the muddy trail I came up, two miles back to the car, and here and there I run for a few steps at a time, focusing on form:  bending knees, picking up the feet, landing lightly.

On the drive home, gray masses still moving in from the dark and ragged west…but gradually they stretch out, turn pasty white, and drift apart, and to the south the sky glows robin-egg blue.

Running the Long Path is available on Amazon – click on the image to check it out:

One thought on “Return to Kaaterskill High Peak”