Slowly whittling away the remaining peaks for April, the warmer weather finally making things at little easier — and not just for me, but birds everywhere calling and singing and flitting about from branch to branch or circling overhead.  I started out this hike in high spirits, but well before the half-way point it was turning out to be more difficult than anticipated….

The plan starts at the parking area in Deep Notch, a gash in the ridgeline that might’ve been chopped out with a hatchet.  First: climb and descend Halcott to the west. Then:  cross to the eastern side of the of the Notch, make my way up Balsam and over to Sherrill and North Dome.  Finally: follow my tracks back to the Notch.  Studying the map, the route looked tough but feasible.

On the highway driving north, a low ceiling, dark gray and undulating.  To the north, silhouetted against the glowing white horizon, some stormy-looking clouds turbulent and ragged.  But also some breaks in the cover, where the spring sky shines through in a surreal shade of aquamarine….in other words, a wild mix of effects, which is typical for spring in the mountains.

After a long winter I’m hungry for light and blue sky, but needless to say, Deep Notch is socked in when I finally arrive, and the narrow strip of sky overhead is all gray.

The plan starts with a short walk down the road, and for the first time I notice it really stinks of tar and burnt rubber.  I hop over the guardrails and scout for a place to cross two converging streams.  A few slips and grunts later, I’m trudging uphill, slowly but steadily, and now my attention turns to the birds, whose songs were ringing through the forests on my last hike in the Catskills just the other day.  There was one bird in particular, which I heard from the summit of Balsam Lake Mountain all the way down into the valleys, singing a fast-paced, rollicking, burbling song full of ups and downs.  But it staid hidden high in the tree tops, never taking wing, never stirring at all so far as I could tell, even when I stood still for minutes at a time scanning the canopy with binoculars.  Today I’m determined to spot it, and the binoculars are hanging around my neck at the ready.

But this morning, the forests are silent.  A woodpecker darts off at one point, but otherwise during the hour-long climb to Halcott, I see or hear nothing.  Perhaps the gray sky subdues the birds, just like me.

Mists are blowing across the summit, and after signing in at the canister, I turn about and begin the descent, initially stepping over a series of little streams trickling down and off to the left, where the terrain steepens.  They’ll end up cascading over a series of low falls and then flowing into the stream by the road I crossed earlier.  Looking out across the valley, I see my next destination, Balsam Mountain, looming on the other side of the Notch, and behind it Sherrill Mountain.  I change course slightly to aim right for Balsam’s base.

Nearing the road, some loud chirps ring through the woods — but not birds, just chipmunks, alarmed by my passage.  I pause to admire the cascades whose tributory streams I’d stepped across up above — when suddenly I hear it!  That special bird, somewhere high in a tree on the far bank, its song all but drowned out by the noise of the water.  Out come the binoculars, but nothing is visible.

Back at the base of the Notch, and crossing the road once again that acrid smell.  Now starting the climb, passing an old stone wall, and then a few yards later popping out on a right-of-way underneath a series of poles carrying power lines.  From here the slope steepens, and it seems much worse than Halcott, although it’s not the grade (33% here vs. 32% for Halcott).  Rather it’s the footing, which here is a mix of chunky rocks and loose dirt, whereas on Halcott the slopes are covered in dense leaf litter.  Also the forest on this side is a tangled mess of beech and striped maple saplings growing under mature northern red oak with a lot of fallen branches.  It’s not difficult, just annoying.

I persevere slowly upwards and once at the summit congratulate myself on reaching Balsam Mountain, only to find on the map that this spot is just an intermediate knob on the way to Balsam — and suddenly I realize this is going to be a long and difficult day.  Gray sky, silent forests, no birds to speak of, and I’m already hungry (despite breakfast) — these factors weigh on my spirits.  I start to feel like maybe I’m spending too much time bushwhacking in the Catskills — overdoing things perhaps.  Well, I’m in a hurry to get a lot done.

I trudge along feeling a little grim.  Out of the corner of one eye, I spot a sign, and checking the map find this is a corner where New York City watershed land abuts New York State Forest Preserve territory — and here, in the middle of nowhere (miles from roads or trails), the two agencies have posted this boundary with a number of prominent signs and blazes, as if worried that one might snatch an extra acre from the other.

The summit of Balsam Mountain is an undistinguished spot in thick beech forest.  Almost two thousand feet below, the Shandaken Tunnel carries a huge volume of water from the Schoharie Reservoir to the Esopus Creek, from which point it flows through the water supply system to the thirsty citizens of New York City.  I didn’t think there would be any sign of the tunnel up here, and indeed there is not.

Now on the way to Sherrill, following a level ridge, through an open forest which seems to consist mainly of beech, which means plenty of branches shooting out to the sides and harassing the passer-by.  They’re not hard to push away:  you move your hands in front of you like a Kung Fu fighter deflecting punches, or you let the branches drag across legs or chest.  But this get a little tedious after a while, and now there’s a layer of snow, just a couple of crunchy inches, but enough to brake my speed.  I notice the snow is dotted with empty beech nut husks. 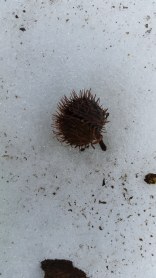 I mope along, concerned about the pace, annoyed by the beech, dismayed by the gray silence.  The sun breaks though the clouds for a moment, the snow brightens, I put on sunglasses.  Off to the south, glimpses of blue mountains walking across the horizon, but I’m not interested.  Since there aren’t any birds, I stop to examine the bracket fungi growing upon dead and dying trees (maybe Trichaptum biforme, or one of the Stereum species, or Turkey Tail, as with anything out here it’s hard to tell for sure). 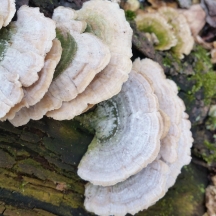 The route to Sherrill goes on for another mile, not too steep or crowded, but the ground is soaking wet in some places, and soon my feet are cold and wet, not a major concern, just uncomfortable.  More ominous, my left ankle is complaining a little bit from all the climbing.  Time for a change in plan occurs:  there’s no way I can make it to North Dome and then return on this route all the way back to the Notch; instead, I’ll drop down into the valley and hike back along the road.  With this decision is made, I feel a little steadier.

Into the boreal zone on Sherrill, but it’s passable — besides here and there stepping into a knee-deep snowdrift — I make it slowly and steadily to the summit and then drop down into the saddle between Sherrill and North Dome.  It’s a little steep here, but I’ve been up and down this slope before, and make my way around the sandstone ledges feeling confident and surefooted.  In fact, it’s surprising how good I feel, especially thinking back to past hikes where steep unstable slopes were a major concern.  Perhaps the barefoot hiking has helped with balance and made careful foot placement more natural, and if so, the practice is paying big dividends today even with shoes on.  My enthusiasm dwindles, however, when looking to the front and catching sight of North Dome rising above the intervening notch:  it looks dauntingly steep and snowy.

But it’s not as bad as it looked.  More beech, more wet spots, more snow, but overall slow and steady progress, and like Sherrill, the boreal zone’s not that bad.  I make it to the summit, look around for the canister, check GPS and find it is just a few feet away.

The three objectives for today’s hike — Halcott, Sherrill, and North Dome — are now complete, and I feel a huge sense of relief.  Now I just have to get out of here.  It’s past 5:00 PM, and while I’m carrying lights, I don’t really want to be out in these grim, gray, wet forests after dark.  A glance at the map identifies the ridge I want to walk down into the valley, and I head off through a spot that’s relatively flat and open and then drop down onto the ridge.

And it turns out to be a wonderful ridge.  Not too steep, relatively open forest, and the light snow cover makes it easy to see the lay of the land.  I step along confidently and surefooted, feeling very positive — and of course, whenever I say this, a foot slips or a branch whacks me — but a moment later I’m feeling good once again.  At around 2,800 feet, it’s into hemlocks, beautiful tall trees with feathery green needles, and a very magical feeling to be moving through their shadows.  A pair of robins flies into a nearby tree and stand guard, looking serious and attentive, and a few seconds later, a pair of downy woodpeckers darts in and gets to work.  Evidently a multi-species task force.

Almost at the road and an amazing discovery: hemlock varnish shelf (Ganoderma tsugae).

Finally the road, and now there’s a five-mile walk, but I stretch the legs out and walk quickly, reaching a 4.0 mph pace and then backing off a little in respect of the ankle, admiring the West Kill stream flowing to the left, and above it the ridge I’d just walked across with North Dome, Sherrill, Balsam Mountain, while in the distance across the Deep Notch, a shoulder of Halcott known as Sleeping Lion.  Strangely, above Balsam, a break in the gray cloud layer and a patch of blue sky, the sun shining through right in that same area where I’d pulled out sunglasses.

Lots of birds in the valley, although mostly the common kinds:  starlings, doves, sparrows, more robins.  Passing  a farm house, high in a tree, a small bird, so small I can’t make out any features even with the binoculars, but singing that special song.  (Based on a recording I made while passing the farm house, suggestions from a Facebook group devoted to bird identification, and some online recordings, that special bird might very well be the warbling vireo.)

The final walk uphill back toward Deep Notch, I stare at the cliffs overhead, impossibly sheer.  The Shandaken Tunnel crosses underneath on its way into the base of Balsam Mountain:  two ventiliation shafts poke out of the ground by the side of the road.  Almost back to the car now, passing a stream-fed pool, the water is the emerald green of the hemlocks standing watch and so clear you can see the bottom.

And one more time I notice that stench of asphalt.

Running the Long Path is available on Amazon, and just got another positive review!  Click on the image to check it out.