The day was overcast when Odie and I set out for High Point, not the best conditions for appreciating the 100+ mile views, but you never know when the winds might shift, or what you might see if you opened your eyes.

Arriving at the Sam’s Point Visitor Center, we found mist drifting through the air.  From Sam’s Point itself all that could be seen was a wall of cloud, motionless, featureless, and impenetrable — it was like staring into a murky pond or peering into an abyss.

The trail rolled off into the distance, a gray stripe under a great blank sky, while the forest hunkered around us in the mist.  The scene was slate-green and gray — less than inspiring and arguably a bit dismal — but at least there was a variety of vegetation to examine as we sauntered along:  ferns, blueberry, mountain laurel, cottonwood, aspens, sassafras, birch, and the ubiquitous pitch pine (Pinus rigida).  I took a second look at a pitch pine:  the tree was speckled with warm brown spots, as if in bloom.  Afterwards I learned that these are not exactly flowers, nor are they cones; rather, they’re called microsporangiate strobili and they shed the pollen which fertilizes the cones. 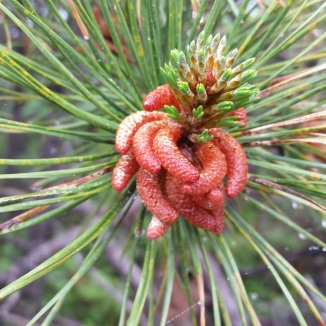 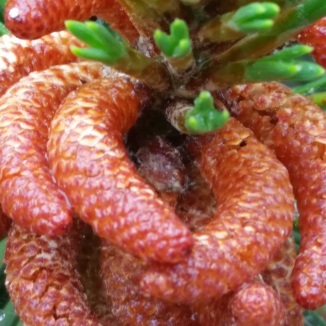 Glancing around, I discovered the pitch pine everywhere had turned into this warm mottled mix of brown and green.  Strangely enough, I’d never before noticed this phenomena, despite having hiked and run among these pines for over twenty years.  Well, if nothing else, we could add a touch of brown to the otherwise dreary palette of gray and green.

Odie and I walked on, and soon the trail reached the turn-off to Indian Point, a vantage point I’d never been to.  A bog walk led out across a muddy section — and who can resist stepping onto wooden planks?  A little later we were back on a dirt footpath descending the mountain’s southwestern slope.  The year before a major wildfire had torn through this area, and now we passed thousands of pitch pine that had been caught in the conflagration — they looked like an army of black skeletons marching through the mist, charred branches waving like arms. 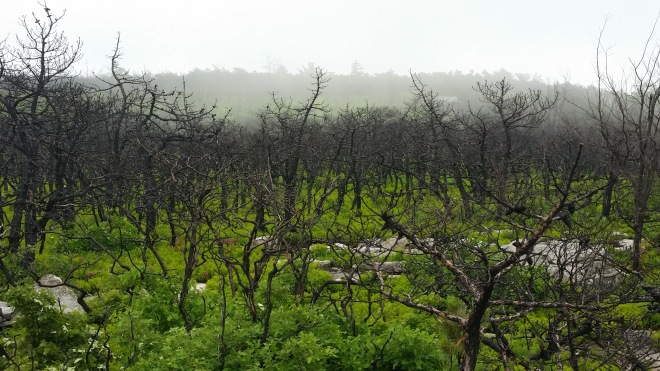 But all was not somber.  From the black soil sprouted blueberry and bracken fern, and with the pines no longer blocking the sun, these shrubs were beaming with health, indeed they were running riot below the hapless trees, and their leaves were glowing in a luscious and wildly vibrant shade of green.  Perhaps it was just the contrast with the gray-black backdrop of ash and mist.

Odie pranced ahead while I stepped more slowly.  Suddenly, a flash of fuschia caught my eye:  sheep’s laurel (Kalmia angustifolia) was in bloom, popping out here and there among the green bushes.  The mix of purple and green was phantasmagorical, that is, it felt like watching images projected by a magic lantern, or staring into a kaleidoscope.

We reached Indian Point, or at least the point where the trail petered out, and stopped for a break on a rock outcrop.  Out in the misty distance, the slopes of the southern Catskills appeared as faint edges between regions of darker and lighter gray, while the surface of the Rondout Reservoir was a spot of flat gray light.  On cloudy days like this, life seems to slow down, and you may find yourself in a more contemplative mood.  I watched a spray of mountain laurel flowers bobbing in the breeze, waiting patiently for bees to arrive and spread their pollen, or perhaps the bees had already come and gone and the purpose of the flowers was complete.

After a little while we returned to the main trail and then wandered up to High Point.  The clouds had pulled back a mile or two, begrudging us just enough visibility to survey the surrounding plateau, but not yielding the 100-mile views we’d come for.  Once again, all was gray and green, until as we were strolling along Berrypicker Trail, I became aware of a pasty yellow color creeping out from underneath the vegetation.  In some places the yellow was a frizzy stubble just emerging from the ground, while in other places the yellow had gathered itself up into clumps of thorn lichen (Cladonia uncialis).

The same pasty yellow color had also appeared on the gray rocks we were stepping across, starting as small dots and then expanding outward in cracked circles of Golden Moonglow Lichen (Dimelaena oreina) and wavy tendrils of Rock Shield Lichen (Xanthoparmelia).  The yellow of these lichens was a subtle shade, and easy to miss, until you looked down and noticed other lichens contrasting in charcoal gray or chocolate brown.  The patterns of color and texture were constantly changing, but the path had to understood as a long gray ribbon that was streaked and dotted with pasty yellow. 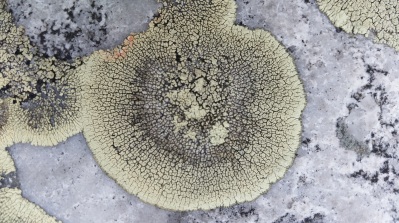 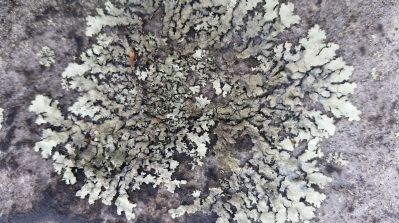 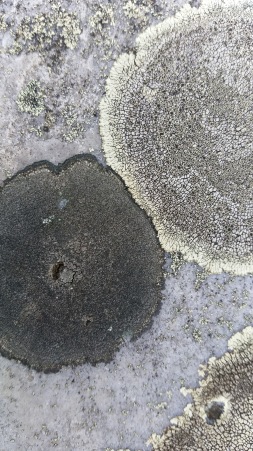 Turning onto Smiley Carriage Road, I noticed pockets of moss peeking out from between the rocks, in some cases in florescent tints of green and yellow.  Then I saw a large mound of moss in a such a vivid mix of yellow, brown, orange, and maroon, it seemed like the moss was shouting for attention. 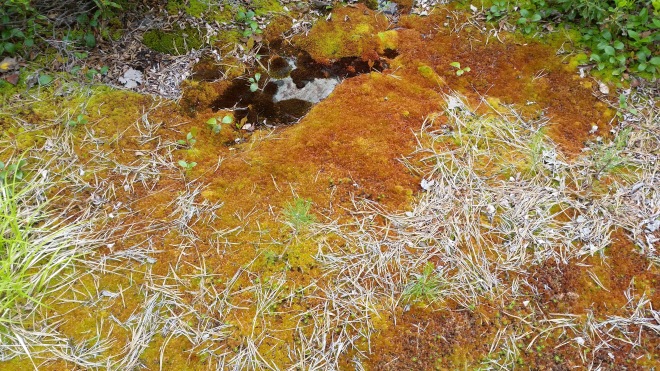 Glancing at my watch, I found that several hours had passed in a flash, and now it was time to head back or risk missing dinner.  Odie and I turned onto High Point Carriage Road and began walking towards the visitor center when I noticed that some of the conglomerate rocks littering the trail had broken apart, exposing a rich red ocher, no doubt a function of iron residues which elsewhere had fully leached out and left the conglomerate sparkling white.  What a surprise to discover that conglomerate rock is much like myself, that is, white on the outside, and red on the inside.  That iron could be such an important component of both a rock and the human body is a reminder that animate and inanimate forms derive from the same elemental interactions.  This raises the question, is human life nothing more than a swirl of colors? 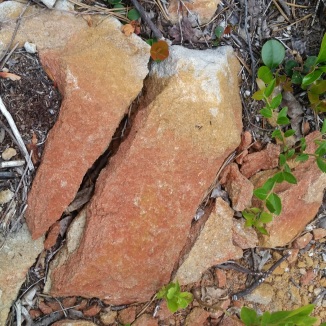 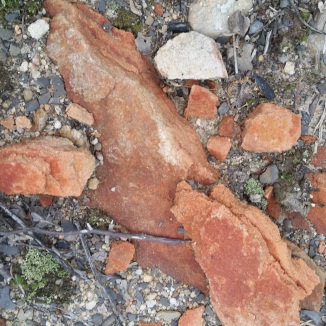 We were almost back to the visitor center, when we made a final discovery: Cinnamon Fern (Osmundastrum cinnamomeum), so-called because of the sparkling tan color of its reproductive fronds.

We hopped in the car and drove home under still-cloudy skies, leaving behind the stolid slate-green-gray mountain plateau and its wildly spinning kaleidoscope of psychedelic colors.

If you gaze long enough into the abyss, the abyss will also gaze back into you.

Thanks to John Franklin for help identifying the lichens

Check out Running the Long Path on Amazon 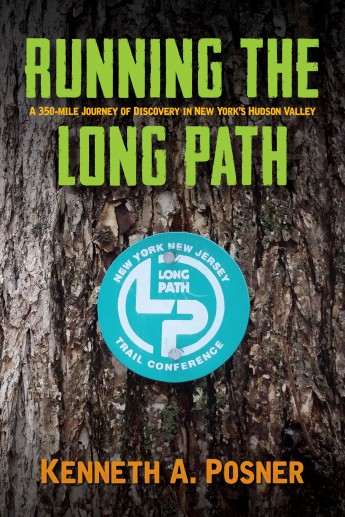 One thought on “Shawangunk Rambles”