Sunday was beautiful: sunny, calm, warm (in the 50s!) — a respite from the snow, ice, gusting winds, and heavy cloud cover more typical of February in  New York.  A great day to be alive and outdoors.

Driving back to the city with Odie the Labradoodle, I pulled over at a trailhead on the Long Path, figuring we’d sneak in a two- or three-mile hike.  The snow had largely melted, leaving only scattered patches, so I took off sandals and stepped gingerly onto the path and found it to be a manageable mix of dirt and mud that had warmed up nicely in the morning sun.  Odie scampered ahead, while I sauntered along, and soon we were clambering up the lichen-crusted granite rock face that marks the summit of Long Mountain, a 1,155-foot peak in Harriman State Park.  Carved into the rock is a memorial to Raymond Torrey: 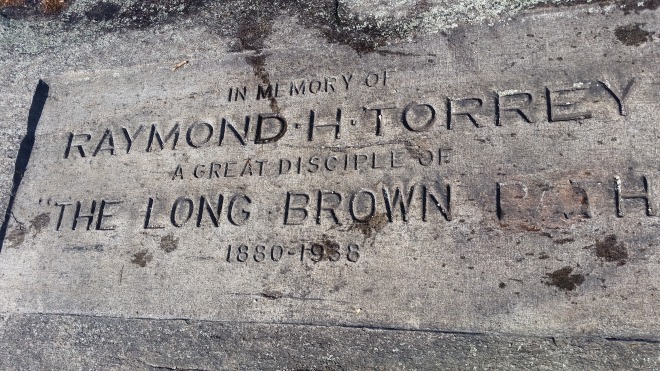 It’s interesting that Torrey’s friends remembered him as a “great disciple of the Long Brown Path.”  The reference is to the poetry of Walt Whitman, who celebrated the unique path each individual follows through life and expressed the optimism felt by late 19th-century Americans about democracy, opportunity, and the growing importance of a young country on the world stage:

Afoot and light-hearted I take to the open road,
Healthy, free, the world before me,
The long brown path before me leading wherever I choose.
— Walt Whitman, Song of the Open Road

“Disciple” means follower or student, and perhaps his friends were remembering Torrey as a diligent student of nature, one who could identify hundreds of species of plants, was an expert in rare lichens, and a passionate bird-watcher.  But they could just as easily have memorialized him as a founding member of the New York-New Jersey Trail Conference, a major contributor to the creation of hiking trails in the Hudson Valley (including the Long Path and the Appalachian Trail), a conservationist who fought against over-development, and a promoter of hiking, volunteering, and environmental causes through his popular newspaper column.  He was so prolific that when he passed away it took committees of volunteers to continue his work.

Eager to stretch our legs, Odie and I continued northwards on the Long Path, descending from Long Mountain’s summit and heading toward a glacial U-shaped valley.  Now that we were on a north-facing slope, there was more snow on the ground, and this was fine in bare feet for the first few steps but then became uncomfortable rather quickly.  “Numb is dumb,” as they say, so I was glad when the snow gave way to dirt and leaf litter, with a few rocks and acorns to keep things interesting, but not too many.  Then the path dropped steeply down the side of the valley, forcing me to pick my way through rocks and more snow.  Below a stream meandered across the valley floor.  I recalled crossing this valley in August 2013 during my through-run of the Long Path and encountering a multitude of small frogs hopping about on the trail.  When they saw me coming, they’d jump into the nearest puddle, squeaking in alarm.  Today the valley floor was covered in snow.  We turned around and headed back.

On the way back to the parking area we discovered a side trail that led up to Long Mountain’s summit on a slightly different route.  Curious, I took a few steps and discovered what appeared to an alternate branch of the Long Path.  Strangely, the blazes were brown instead of the official color aqua.  A plastic disk identified the path as a historic route of the “Long Brown Path,” as did some graffiti on a rock.  It was an odd memorial for a 100-yard stretch of abandoned trail. 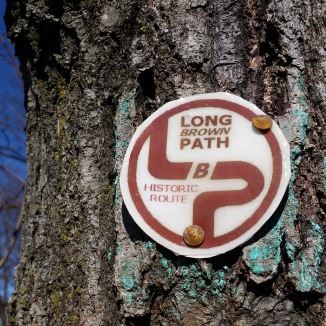 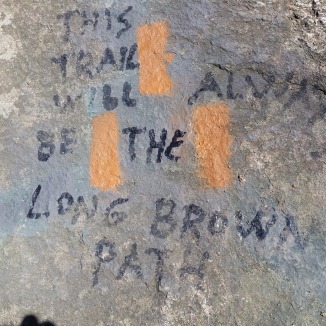 Back on Long Mountain again, I looked out one last time at the Perkins Memorial Tower in the distance and then as I was turning to leave noticed some small trees growing among the rocks.  They looked like the yellow birch seen all over the Catskills, with the same characteristic lenticels (horizontal stripes in the bark), but the bark was dull gray, not yellow.  Maybe this was young black cherry, whose bark has similar lenticels but is darker.  I peered at the buds.  On birch, the buds grow alongside the twigs, whereas on cherry they grow at the tips.  This was a birch. 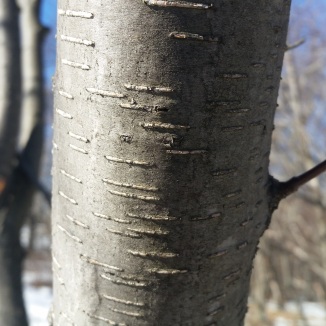 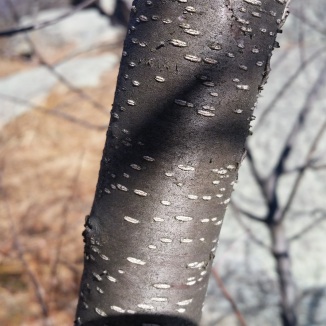 Black cherry
Could this be the mysterious black birch (Betula lenta), which I’d heard of and read about but never encountered?  What’s distinctive about black birch is that it contains methyl salicylate or wintergreen oil, an ingredient in chewing gum, mouthwash, and topical pain relievers, and you are supposed to be able to detect a wintergreen scent in the bark.  In search of this tree, I had sniffed at many a birch twig and even chewed on a few, but never found anything distinctive.
Curious, I removed a small twig and held it to my nose — and now for the first time, the scent of wintergreen filled my nose.  It was unmistakable.  Although not exactly the same as the wintergreen scent in chewing gum and other commercial products, this was more exotic:  it seemed a warmer, muskier, smokier scent, reminiscent of summer not winter.
Odie looked back at me, wondering what was the big deal.  It was time to go, and we strolled back to the car, enjoying the soft dirt trail and the strangely warm February sunshine, but not before I’d sampled two or three more twigs from the small grove of black birch, bewitched by the magical fragrance.

Running the Long Path is now available on Amazon — click on the image to check it out. 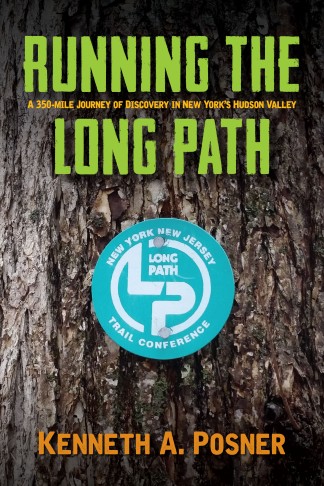 One thought on “Finding Black Birch on the Long Brown Path”