Following an unsuccessful attempt on the Catskills 9, I returned two weeks later to bag the three peaks I had missed, namely Slide, Cornell, and Wittenberg.  It was six miles barefoot over steep and rocky trails, and then six miles return in Luna sandals, but a relatively uneventful journey without physical or mental drama.  It was also a chance to appreciate the mountains, make new discoveries, and enjoy the signs of spring.

The 3-mile climb to Slide Mountain started along a washed-out trail full of mud and water.  I recalled passing through here two weeks ago, at night with the temperature falling into the 30s, and how my hand got cold holding a metal flashlight, and now it seemed remarkable that I had persisted.  Shaking my head at the memory, I moved on, taking a left at the first intersection and heading up a trail that rises 1400 feet over 2 miles for a respectable 13% average grade.  Higher up on the mountain, the rocks consisted increasingly of conglomerate sandstone with embedded quartzite chunks, and the path was also sprinkled with quartzite pebbles, and this made for rougher footing and a slower pace.  The sky was overcast, the air was dead still, and the forest was silent.  The forecast had called for rain, and it began to sprinkle ever so lightly.  But then the sun came out.

Moving slowly one can study small details, and now I caught sight of the elusive Cladonia cristatella, also known as British soldiers lichen, which I had seen only once before.  This is a small fruticose lichen whose stalks are tipped with distinctive bright red fruiting bodies that contain spores.  The lichen is quite small and easy to miss, but once you know what it looks like, you start to notice it all over the place growing on trunks and branches at higher elevations.

By the time I reached the summit of Slide Mountain, the sky had clouded over again.  I made my way carefully down the steep trail on the mountain’s eastern slope, descended two stout wooden ladders bolted onto the rocks, and then arrived at a spring, where I drank a few handfuls of cold rushing water.  Then it was down a couple of scrambles, and along the way I got a glimpse of Cornell and Wittenberg, looking a little like the twin humps of a bactrian camel.  Mist began to drift across the peaks.

The trail dropped down into a saddle before rising toward the peak of Cornell and soon it began twisting around boulders.  It had rained heavily the day before, and water was rushing down the path in many places, and where the grade briefly leveled out, there were standing puddles and lots of mud.  As I climbed further up, the mists I had seen from Slide’s shoulder were now hovering in the forest, dimming the light, and reminding me of elfin cloud forests I had visited in the Caribbean.

Upon reaching the summit of Cornell, I breathed a sigh of relief, as there was less than a mile to Wittenberg, at which point it’d be time to turn around and head back.  But first I needed to lower myself down the notorious Cornell Crack.  Bare feet work well enough on rocks as long as you can find a foothold, but it’s slow because you can’t jump down and land on stones like you would in cushioned shoes.

The ridge between Cornell and Wittenberg is narrow, and I could see mist on either side of the path where the slope drops steeply into the Woodland Valley to the northwest and towards Peekamoose Road to the southeast.  The summit of Wittenberg is a nice broad ledge where you can stretch out, catch your breath, and enjoy views of the Ashokan Reservoir.  But there were no views today.  I hung out for five minutes, and then put on my sandals and turned back.

The sandals allowed me to move at a much quicker pace, alternating between a slow jog and a fast walk, although when wet they tended to slide around on my feet in an awkward fashion.

The saddle below slide is covered in a forest of short, stunted yellow birch, and the leaves were not yet out.  I looked up at the summit 600 feet above and pushed on as quickly as I could, stopping once again at the spring for cold, clear water and taking a final glance at Cornell and Wittenberg, whose summits were now cloaked in mist.  At the top of Slide Mountain, I noticed common goldspeck lichen (Candelariella vitellina) on the rock slab right next to the memorial plaque honoring John Burroughs.  This was the first time I’ve seen a yellow-colored lichen in the Catskills. 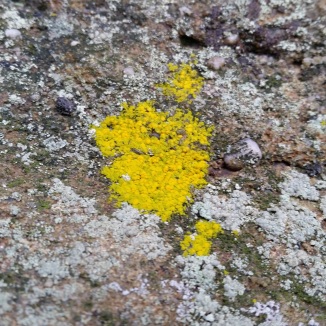 Past Slide’s summit there are a couple of vantage points with views opening to the north.  A layer of heavy-looking grey clouds was moving out high overhead, while white cumulus clouds roiled over distant mountains and caught the sun.  In between were patches of blue sky, and sunlight dappled the mountain slopes where the leaves had not yet emerged from buds.  The scene conveyed a feeling of great movement and widespread activity, which seems appropriate for all the changes that occur during the spring. 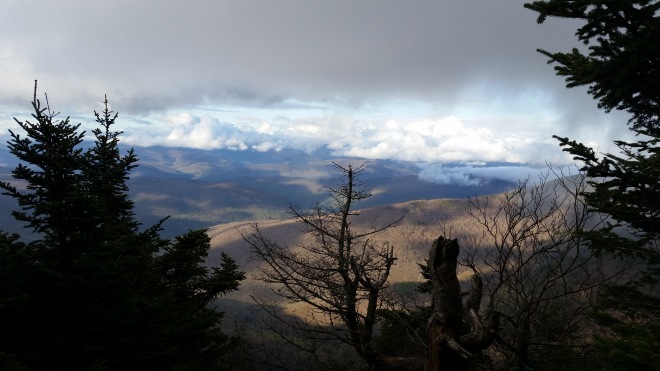 And then it was down into the valley and back to my car.  After this trip, only one single mountain remains of the Catskills 35 highest peaks to be climbed barefoot, but there’s a lot more on my list to see and do.