I rolled across the finish line in 3:57, precisely in line with the modest goal of breaking four hours.  The year before, my time was just over four hours, as best I could recall, and I distinctly remembered a deep sense of frustration as I struggled to stay on pace.  It was nice to see some improvement — especially after a string of races in recent months with disappointing times.

Caumsett is a 50k (31-mile) race that takes place along a 3.1-mile loop in Caumsett State Park on Long Island’s northern shore.  It’s a pretty course on a paved path through woods and fields, and the day was sunny, calm, and cool — beautiful conditions for racing.  Except for a blister, I had felt good throughout the run, managing to complete it with no fluids or calories.  Waiting for the final results, I thought I had a shot at #3 in my age group.

So I was a little surprised when a friend asked, what went wrong?

She pointed out that I had finished faster last year.  When I went to check, I found she was right — and my memory was wrong:  my time last year was 3:50.  In which case, Caumsett was just the latest in a string of poor performances.  Last November, the Chicago Turkey Day Run had been my worst 5k time in years:  I was struggling with a hacking cough and couldn’t sustain my normal pace for the first mile, and the next two were even slower.  Prior to that, I had almost backed out of the New York Marathon, recognizing that my training had been sorely deficient.  And sure enough, I fell apart at the half-way point and finished ten minutes slower than the year before.  In September I had run the 5th Avenue Mile 8 seconds slower than my previous effort, which wasn’t too bad considering a nagging injury sustained at the 100-mile Beast of Burden in August, where my time had slowed by two hours.  Four races, four disappointing times, and also my speed work had been inconsistent — all this raised the specter that age was finally slowing me down.

To add insult to injury, when the results for Caumsett were finally released, I came in #4 in my age group, just missing a medal.

Inconsistent performance.  Unreliable memories.  I pretended it didn’t matter:  this wasn’t an “A” race, after all.  But after a few days, I thought a closer look at the data was probably warranted.  Perhaps it would give me some clues to improving performance.  Thanks to my GPS watch, there was plenty to analyze.

I started the analysis by comparing 2016 against 2015.  In both races,  my pace during the first eight miles was similar, but in 2015, I had gotten faster in the second half, whereas 2016 was a consistent effort throughout.  And now the memories came back:  I had gone into 2015 with a strategy that called for ratcheting down the target pace every three miles.  Despite a solid effort, I hadn’t quite hit all the goals — in fact, so hard was I trying that at one point I’d tripped and fallen to the ground, much to the amusement of the runners around me  (fortunately I executed a combat roll and was right back up on my feet again).  Funny how I remembered the frustration, but not the performance. 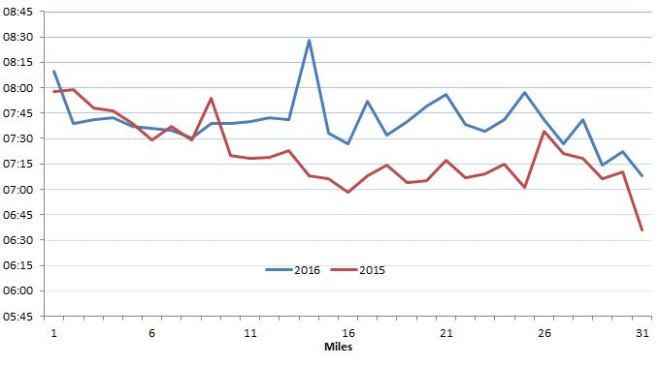 The data also showed that I had put out a much bigger effort in 2015.  The scatter plot below shows the average heart rate associated with each mile run in both years.  Comparing the data, what really jumps off the page:  in 2015 roughly half the miles were run in the 145+ heart rate zone, whereas in 2016 I managed to run only two miles in that zone.

The wonderful thing about data is the clarity.  Looking at these results, a light bulb went off:  I realized that I had fallen out of the habit doing really hard speedwork drills, specifically 800-meter intervals and 1-mile repeats.  These drills get your heart rate all the way up to maximum, and because they require significant effort, it’s easy to come up with reasons to skip them:  tapering for or recovering from a race, injury, focusing on different goals besides speed, not feeling up to the necessary intensity, or not wanting to face disappointing times.  My training log confirmed the intution:  Since last July, I hadn’t completed a full set of 800-meter intervals or 1-mile repeats.

The chart above shows almost ten years of data.  The red dots and fitted line show the high level of fitness I had achieved in early 2015, prior to the August injury, including one mile at 5:35 with average heart rate of 159.  In contrast, a few half-hearted efforts in February (the group of black dots circled on the left) indicate how much fitness I had lost over the last six months and are entirely consistent with disappointing race performance.  After I recovered from Caumsett, I headed back to the track and was able to improve my times (the second group of black dots to the right).