The Stoic philosopher and Roman emperor Marcus Aurelius once wrote,

It is in your power, whenever you choose, to retire into yourself. For nowhere either with more quiet or more freedom from trouble does a man retire than into his own soul

This advice reminds me of one of the messages in the Bhagavad Gita, a two-thousand year-old Hindu text:

Wherever the mind wanders, restless and diffuse in its search for satisfaction without, lead it within, train it to rest in the Self.  Abiding joy comes to those who still the mind.

I’ve been trying to put this advice into practice.  Walking down the street in the face of an icy winter wind, I make an effort to relax.  Instead of fretting at subway delays, I imagine shifting my brain into neutral gear.

The other day, arriving at a restaurant a few minutes before my wife, I took a deep breath and put away my phone…

… and looking up found myself staring at a guitarist.  Walking in, I hadn’t noticed there was a jazz trio playing in the corner.

Out the front window of the restaurant stood a tree lifting its branches in what seemed a joyous effort.  It suddenly reminded me of the “tree pose” I used to practice during yoga class.  The phone came back out for a moment, and I snapped this picture:

Later on, a friend commented that the picture didn’t look quite right.  What I had recalled from yoga class was the move we used to do immediately after tree pose.  This position goes by different names, including “extended balance pose.”  Whatever you call it, the tree was clearly in that pose.  The point is, that when you put away the phone, you start to notice things.

In flood time you can see how some trees bend,
And because they bend, even their twigs are safe,
While stubborn trees are torn up, roots and all.

Sophocles’ point is that people should learn from trees:  bend, don’t break.  We should act like the wise man, who’s open to learning new things, rather than the stubborn man, who insists on his own opinion even when it might not be right.

Trees exhibit flexibility when it comes to weathering the storm.  But they’re relentless in their pursuit of the light.  I love how trees reach toward the sky: 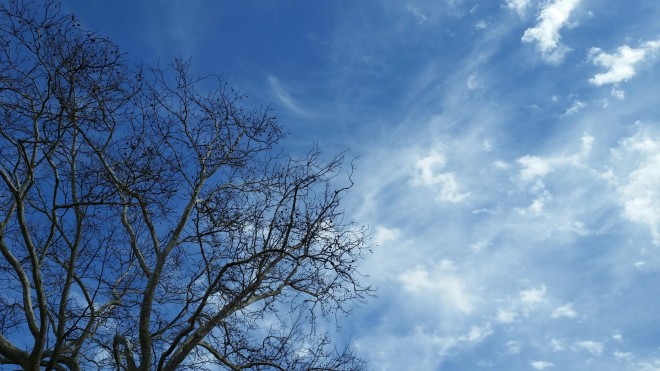 Flexibility and relentlessness make a strong combination.  The first trees appeared just three or four hundred million years ago, yet today Earth is home to 3.04 trillion of them, according to a recent study.   Their hard work has evidently paid off.

It is not an effort for certain liquids to form crystals, or for certain elements to combine with certain other elements and form new compounds, but it is an effort for a tree to resist the wind, to lift up tons of water and minerals against gravity, to force its roots through the soil or grip the rock, and it is an effort for the mother to bear and nurse her young. For anything to live and grow, effort is needful; not commonly a painful effort, but a joyous one.

I’ve recently become interested in lichen, which are combinations of fungus and algae or cyanobacteria.  Lichen is sensitive to pollution, and it’s a little depressing when I run through New York City seeing the trees standing naked, or at most dusted faint green in a few spots.  In the Catskills, where the air is pure and clean, the trees are surrounded by luxuriant moss and draped in lichen shimmering blue, grey, and green.

There’s a lot more I could write about trees, but I need to get back to work.  The Bhagavad Gita warns us that you can’t achieve perfection by shirking duty, and Marcus Aurelius would remind me to act purposefully.

I’m pushing the gearshift back into drive, but also looking forward to my next run.

Why are there trees I never walk under but large and melodious thoughts descend upon me?