Having just completed an 87-mile training week, I was disappointed in the results, although hardly surprised:

I had averaged a depressing 10 hours per day sitting.

This conclusion was based on diary that tracked how I spent my time over the last week:  sitting, standing, walking, running, and lying down.

The motivation for this exercise was the growing concern among healthcare professionals about the risks of a sedentary lifestyle, especially too much sitting.  Indeed, according to one recent study, more than 7 hours a day sitting could be unhealthy.  In which case, I’m at risk.

Seven days contain 168 hours, and according to my diary, I was immobile (sitting or lying down) for 76% of that time.  The only one I know who spends more time lying around would be Odie the Labradoodle.  Let him out in the mountains, and he’ll happily go all day and night without break.  But at home, except for two short walks and some time spent hanging around the dinner table, he spends the day asleep, either on the sofa or under the bed. 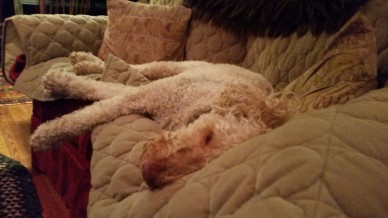 To be fair, I shouldn’t penalize myself for time spent lying down.  Last week, I averaged approximately 8 hours of sleep a night.  That’s time well spent, especially during a heavy training week.  Excluding sleep, this chart shows the breakout of activities while awake:

Even excluding sleep, sitting for 10 hours a day amounted to a whopping 64% of my waking time last week.  That’s the price you pay for a desk job.  I don’t know whether sitting causes health problems.  It’s just as likely that unhealthy people spend more time sitting because they’re tired.  In other words, correlation does not equal causation (the study’s authors acknowledge this).

Regardless, I don’t care to sit that much.  It’s uncomfortable, it messes up my posture, and I can feel my body shutting down.  Sometimes I feel trapped, as if someone had tricked me into taking a desk job, then chained me to a chair.  However, the only person I can blame for this trickery would be myself.  My work colleagues are great people, and they wouldn’t care if I stood up and walked around all day, in fact they’d encourage me to do so if it would make me happier.

And I do try to break up the sitting by taking walking breaks, sometimes just circling around the building a few times to clear my head.  Also, there’s a standing desk in the office, which is great for longer projects, and I get in some standing on the subway and at home while showering or doing the dishes after dinner.  But I don’t just sit at work, I also sit at home, for example, when working on this blog.  And on the weekends, time spent sitting in the car adds up fast, whether it’s getting out to the countryside or taking care of errands.

The good news is that last week I was able to average 2 hours per day running (9% of total time, 13% of time awake) and 1.5 hours per day walking (another 6% and 9% respectively).  The 87 miles covered last week included single runs on Monday and Thursday, two runs on Wednesday and Friday, a long trail run on Saturday, and a hike and track workout on Sunday.

It would be interesting to compare my charts to those of Ted Corbitt, the legendary runner known as the “father of long distance running,” who routinely ran to and from work each day, accumulating 200 and sometimes 300 miles per week.  According to a recent presentation by his son Gary, Ted was out the door each morning at 6:00 AM, yet he often worked past midnight.  Also, as a physical therapist, he wasn’t spending the whole workday in a chair.  Compared to me, Ted Corbitt’s chart would have shown a lot more time running and a lot less sitting and sleeping.

On Saturday’s trail run, a small group of us covered 13 miles at a comfortable pace under the leadership of veteran Shawangunks trail runner Bob Harris.  One of the fellows running with us, Paul Reynolds, is an accomplished obstacle racer.  He gets up at three AM every morning and spends two hours in the gym before work.  Just this morning, prior to joining us on the trail, he had spent some quality time on the stairmaster.  I couldn’t shake him, no matter how fast I ran.  I’ll bet his charts look more like Ted Corbitt’s than mine.

I’m fearful that if I don’t keep moving, contemporary sedentary lifestyle will drag me down, envelop me in a sluggish miasma, drain my energy, render me enervated and dependent.  Like in a dream, when you’re trying to run, but you can barely move your legs.  That feeling that you’re trapped by The Matrix, or lost in what anarcho-primitivist John Zerzan calls the “work-pay-die ethos” of modern civilization.

But I’m not going to become Ted Corbitt.  No 200-mile training weeks for me.

Maybe I could squeeze in a few more 100-mile weeks from time to time.  That seems like a good goal and a good use of time, depending on what else is going on in life.

And I just realized I can prop my laptop up on the fireplace mantle.  It’s the perfect height to do some work standing up.

But now it’s time to go to bed.  I’d like to wake up fresh for tomorrow’s morning run.