The fifth edition of the SRT Run took place September 14-15, 2018 with over 200 registered participants from 14 states and one from Brazil.  The weather was beautiful: clear and sunny.  But recent rains had left the trail wet, and a few runners struggled with blisters.  Finishing rates were consistent with the last few years, with around 50% of the 50- and 70-mile runners completing the course, while nearly 100% of the 30-mile and 1/2 marathon runners made it to the finish.  It was exciting to see new female and male course records set in the 1/2 marathon and a new female record for the 50-mile division.

The SRT Run has a minimalist format, meaning there are no aid stations (we don’t provide food or water) and no supplemental course markings.  While we provide paper and electronic maps to help runners navigate the course, inevitably some people make wrong turns, and this is by design part of the challenge of the event.  We thank New Jersey Search and Rescue and Sam’s Point Search and Rescue for supporting the SRT Run.  This year, there were four rescues of runners who became disoriented or needed assistance exiting the course, but rest assured everyone ended up safe and sound.

Organizers created this event to celebrate a magical trail that crosses the entire length of the Shawangunk Mountains, or the “Gunks” as they’re called, an area identified by the Nature Conservancy as “one of Earth’s last great places.”  By promoting awareness of the SRT, we hope to build support for further conservation.

The 70-mile race covers the entire length of the Shawangunk Ridge Trail, which makes for a long and daunting but beautiful course.  The trail starts in the High Point State Park outside Port Jervis, New Jersey, at a junction with the Appalachian Trail and immediately passes under the shadow of a monument tower that can be seen from the Catskills sixty miles away.  It proceeds through rolling forests, passes alongside the Bashakill wetlands, and rises onto glacially-scoured rocks on the crest of the ridge before dropping into quiet forests in the northern section of the Mohonk Preserve.  The trail ends in the town of Rosendale, New York, with participants running across a railway trestle 140 feet above the Rondout Creek .  The word “dramatic” does not do justice.

Over the last five years, conditions at the start have never been quite the same, such is the variability of High Point’s weather.  After glorious sunsets and rainbows in prior years, today the start was shrouded in fog, and as the runners were making their final preparations, the monument tower was barely visible.

For the race director and a small team of night marshals, Friday night was quiet.  With New Jersey Search and Rescue on call, we were prepared for problems, but no-one got lost or dropped out.  In fact, the first 70-mile runner wouldn’t drop until Saturday morning.  The problem was blistered feet due to a last-minute decision to go with shoes instead of sandals.  The trails were pretty wet this year, and blistered feet would claim at least two other 70-milers.

I’m inspired by all the athletes who lined up alongside me at the start of the 70-mile race.  Just to be on that starting line took courage and everyone showed true grit to push through the challenges offered up on the SRT this year.  From shoes that never dried, to miles of slipping on wet rocks and roots, this course made sure nothing came easy.  Regardless of whether they finished or not, those who even dared to start the 70-mile division should be proud of what was accomplished.

Jaime Peca of Rochester, New York won the female division in a time of 24:27:08.  The female record of 23:15 still belongs to Melanie Mueller, who this year volunteered as a course marshal at Checkpoint #6.  Of special note, Jaime’s coach, Dick Vincent, race director and creator of the Escarpment Trail Run (now in its 43rd year), attended the event to cheer her on.  (We welcome spectators at the event, but they are not allowed to provide any aid beyond moral support, or they risk disqualifying their runners.)

SRT Co-director Todd Jennings gave the starting command for the 50-mile division at  precisely 6:00 AM, and twenty runners headed out into the darkness.  Twelve would make it to the finish line, for a 60% finishing rate.

Late morning I received a call from one of the 50-milers who’d become disoriented.  Sam’s Point Search and Rescue got on the phone, pinpointed the individual’s location (the runner had gotten turned around and was heading the wrong way), and drove off to retrieve them.

30-mile runners started in four waves at the Sam’s Point Visitor Center.  Because runners in all divisions have until midnight, the 30-milers enjoy a generous 15-hour time limit, and fifty-three of the sixty starters reached the finish for a success rate of 88%.

The first place male finisher was Jake Stookey of Clifton Park, New York, who finished in 5:42:50, an improvement of more than an hour from his 5th place finish in 2017.  Jake also earned a special barefoot pin for his finishers medal by running in sandals, a distinction that reflects the minimalist spirit of the event.  Emma Raub of Brooklyn won the female division in 7:13:15.

1/2 marathon runners face the same challenges as other participants, but because all events end at midnight, these runners have more than thirteen hours to complete the course.  This may be the most generous 1/2 marathon time limit in the world, and it makes racing the Shawangunk Ridge Trail accessible to athletes with a wide range of abilities, some of whom walked the whole distance, while others flew.  The finishing rate was over 94%.

First place male was Daichi Inoue of New York City who set a new course record of 1:56:37, improving on Shawn Bubany’s record-setting run of 2:08 the year before.  Also breaking last year’s record were 30-mile record-holder Henry Pratt, who came in second place, and Shawn himself who broke his own record by 4 minutes and came in third place.  Daichi won the race in 2016, but didn’t finish in 2017 due to taking a wrong turn on the course.  Toni Schwartz of Salt Lake City won the female division in 2:38:33, breaking Sierra Jech’s record from the year before by 2 minutes.

Among the 1/2 marathoners, I’d like to recognize Cindy Wagner, who is a NY-NJ Trail Conference volunteer who maintains a section of the Shawangunk Ridge Trail in the southern Gunks.  Cindy does impeccable work on a tough section of the trail in the southern Gunks with a lot of scrub oak.  I’d also like to recognize Patty Lee Parmalee, who is a a four-time finisher of the race and holds the distinction of being the oldest participant at 78 years.  Patty is an inspiration to all of us youngsters who hope to keep moving even as we get older. 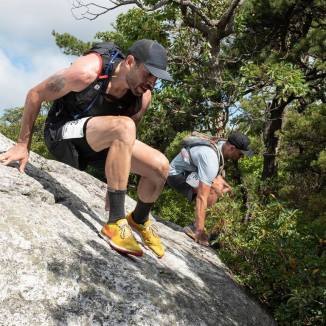 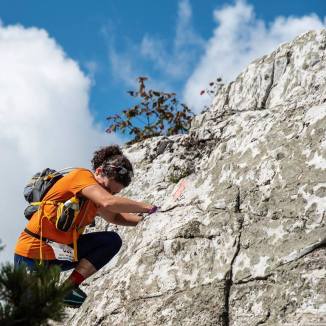 The Shawangunk Ridge Trail is the creation of the New York-New Jersey Trail Conference, a not-for-profit organization with 2,000 volunteers who maintain 2,100 miles of trails in the Hudson Valley.  I’d like to thank all of the volunteers who work on the Long Path and Shawangunk Ridge Trail under the leadership of Long Path Co-Chairman Kevin McGuinness and West Hudson program coordinator Sona Mason, who also helped us manage the finish line, and additionally recognize Trail Conference cartographer Jeremy Apgar who created the special cellphone map that runners use to navigate the unmarked race course.  We were honored to have Kevin present the first-place prizes to the division winners this year.

As part of the online registration process, 38 runners made voluntary donations to the Trail Conference totaling $1,185.  Thank you, runners.

For race organizers, safety is the first priority, and we would not hold an unsupported event on an unmarked course without search and rescue capabilities.  Thank you to New Jersey Search and Rescue lieutenant Bill Winterbottom and Sam’s Point Search and Rescue team members John Schumaci, Jerry Gardner, Tom Atwell, Dan Kelly, Andrew Stoll, John Barton, and Jim Spoor.  SPSAR was busy on Saturday, not only rescuing the 50-miler who got turned around, but also arranging vehicular evacuation for two runners in Minnewaska who fell behind the cut-off, and picking up another runner who was wandering on the roads at night.

Thank you to Kathy Mahady, Stacy Cameron, Yvonne Nedbal, and Dan Hart for helping with parking, check-in, scoring, and picking up runners from the check points.

Thank you to staff at all the agencies which permitted the event, including NJ DEP, NY DEC, Minnewaska State Park Preserve, Mohonk Preserve, the town of Rosendale, and the Wallkill Valley Land Trust, as well as private landowners who allow the race to cross over their property.

Thank you to Tom Bushey and Steve Aaron for taking photos that captured the spirit of the event.

Registration is now open for the sixth edition of the SRT Run on September 13-14, 2019.  To sign up please visit: https://ultrasignup.com/register.aspx?did=60633.

Crossing the Rosendale Trestle on the way to the finish line.  Credit:  Suzy Allman