In Mammoth Lakes for one more night, I need time to plan my final hike on this western trip, a 16-miler in Yosemite National park.  So this will be a rest day…

Rest day means a break from hiking in the mountains, so I’m up early for a 5-mile run along a paved bike path which heads up steeply toward Horseshoe Lake.  The surface is slick, but here and there a tiny little rock stabs me underfoot, sometimes sticking to my skin and thus continuing to poke me for several steps before it bounces away.  I look up as a group of young runners turns onto the path and powers up the hill, leaving me in the dust, no doubt they are a cross-country team.  But there are two or three laggards, and I lock sights onto the smalls of their backs, ever so slowly close the gap, pass them.  Fully warmed up, I’m moving along smartly at a sub-10 minute pace despite a grade so steep my heels are barely brushing the pavement.

So far on this trip I’ve managed to avoid the worst of the crowds, making a point, for example, to stay out of the valley in Zion National Park, where I’d heard rumors that you could only enter via a shuttle bus.  But later this morning when innocently enough I drive a few miles up the road to Devil’s Postpile National Monument, just to take a casual look around, the ranger hands me a shuttle schedule and points me to the turn-around lane.  I beat a retreat to my hotel in Mammoth Lakes, figuring I’ll do laundry instead.

But let’s think things through: since it’s a rest day, what’s the harm in sitting on a bus and looking out the window?  I saunter over to a bus stop a short distance from the hotel.  The driver advises me three minutes to departure, and then I hear him giving the one-minute warning (evidently a tightly-run operation).  A few minutes later at the Mammoth Adventure Center, I’m directed to a ticket window and stand in line behind a pair of tourists who are negotiating a complex transaction involving both shuttle and lift tickets.  Growing impatient,  I shout out, “Is this where I buy a shuttle ticket for $8?” dropping hints that I’m in a hurry and don’t require a lengthy consultative session.  Eventually ticket in hand, I storm back to the bus stop, passing a woolly mammoth statue and kids bouncing from mini-bungee contraptions and it’s back in line once more, where not wanting to waste time, I begin applying sunscreen according to a well-establish routine:  cheeks, nose, throat, back of the neck, shoulders, knees, calves, shins. 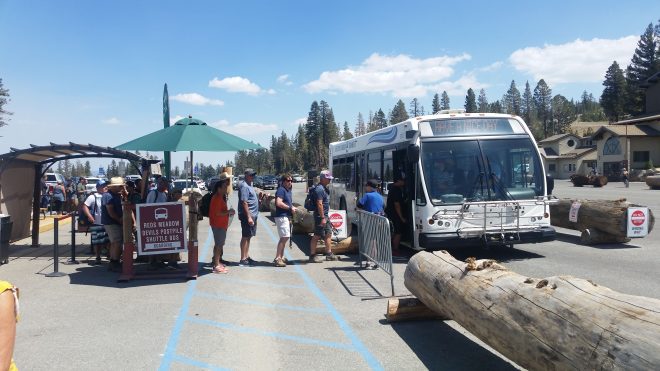 The bus takes us further up the mountain and then drops into the next valley.  A 0.4-mile walk leads to the Devil’s Postpile, which consists of a cluster of hexagonical basaltic columns produced when lava flowed down this valley 80 or 100,000 years ago and slowly cooled.  I walk around the side of the columns and grudgingly climb to the top, which resembles a patio with hexagonical pavers.  I recall similar although less dramatic formations at Hook Mountain in New York’s Hudson Palisades. 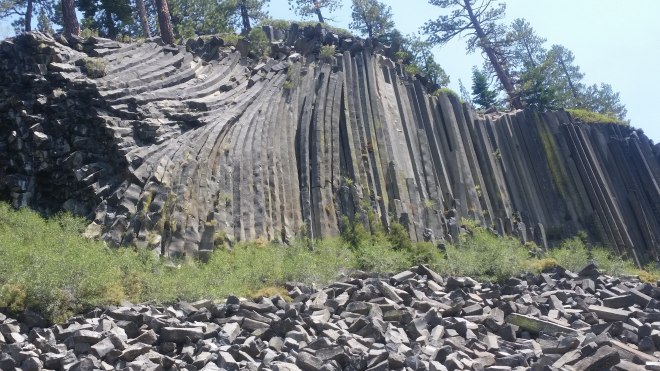 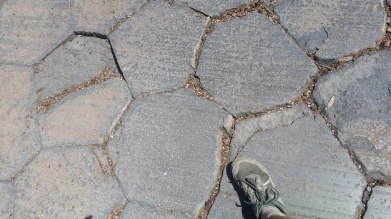 Off to Rainbow Falls, 2.5 miles away, along a lovely gray sand path.  Why, it’s just like walking on the beach!  I’m tempted to take off my shoes, but this is a rest day and might as well let the soles of the feet have a break, too.

Expecting a trickle, I’m impressed by a heavy torrent spilling over the rocks.  The observation point is crowded with tourists.  I take a photo, face about, and after 30 seconds depart. 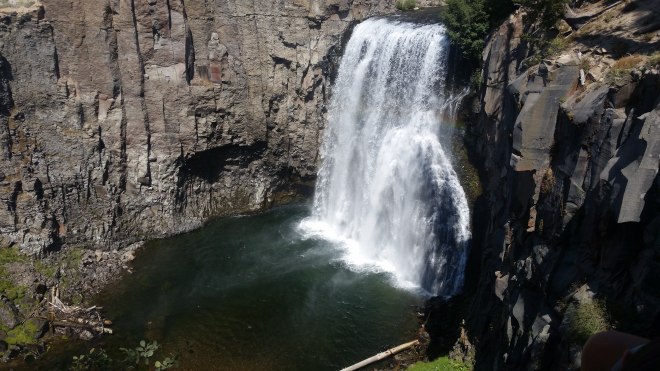 Decision time.  During this short hike, I’ve been evaluating the choice between taking the shuttles back to town, or hiking all the way back instead.  The latter course of action would entail walking four miles over the Mammoth Pass Trail to a free trolley stop next to Horseshoe Lake.  I pause at a junction in the trail, mull things over.  It seems I’d rather keep walking than sit in a hotel room.

The trail to Mammoth Pass unexpectedly leads me to Red Meadows Resort, one of the spots on the John Muir Trail where thru-hikers can rest, resupply, and order a steak.  Soon I’m sitting in a café and drinking a glass of lemonade.  I ask the servers, how far is the northern terminus of the JMT?  They don’t know.  I order a grilled cheese.  They bring a BLT.  However, they redeem themselves by providing accurate directions to the next section of the Mammoth Pass Trail.

Soon I’m hoofing up a steep sandy trail, through a burned out forest, glimpses of the ski lift on top of Mammoth Mountain above me and to the left.  A helicopter flutters by, hauling a bucket of water on a long cable strung out at nearly a 45-degree angle to the rear, bound for the Lions wildfire, which is almost 90% contained.  Nonetheless, a thin haze hangs in the air, obscuring mountain peaks to the west.  One helicopter returns, another heads out. 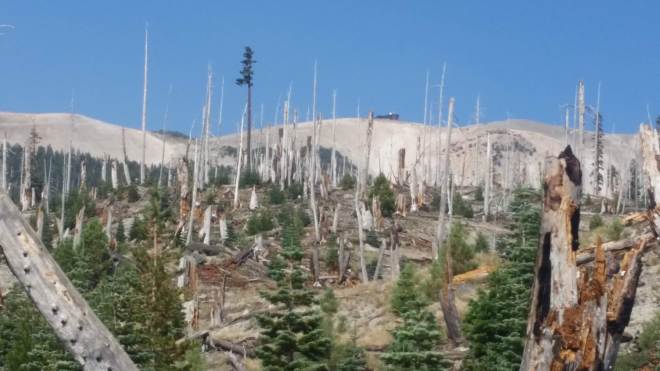 A flash of red up the trail, there must be someone ahead of me, which is a surprise because most everyone is taking the bus back to town.  A rabbit to chase.  I redouble my efforts, but turning the next corner, there’s nothing to be seen.  Glancing around at the pine-forested mountain slopes, I peg the pass at another 200 feet up.  1,000 feet later, there’s still no pass.  A flash of blue – but if anything, it seems even farther ahead.  Whoever they are, they’re moving fast.

A few steps later, here’s a pair of tourists sitting on a log, both wearing blue shirts and one with red shorts.  I give them a nod, barely breaking stride.  A minute or two later, I hear them on my heels, and there’s no choice but to step aside and let them pass.  “You’re hiking fast,” I comment.  The fellow responds in a thick German accent, “she’s trying to show off.”

I resolve to overtake them, and when I do, I’ll keep my stare focused dead-ahead, that way they’ll know this is a race – a friendly, casual competition, all in fun – but still a race, and we’ll see who’s still showing off.

I’m sticking to their tail now, reckoning they’ll soon tire themselves out, while my GPS watch ticks up to 3.5 mph and then 3.7 mph, as the path continues to climb toward the pass that never quite arrives.   I can’t sustain this pace, not on a sandy uphill, not on a rest day, not after running 5 miles up and down in the morning.  They gradually pull away. 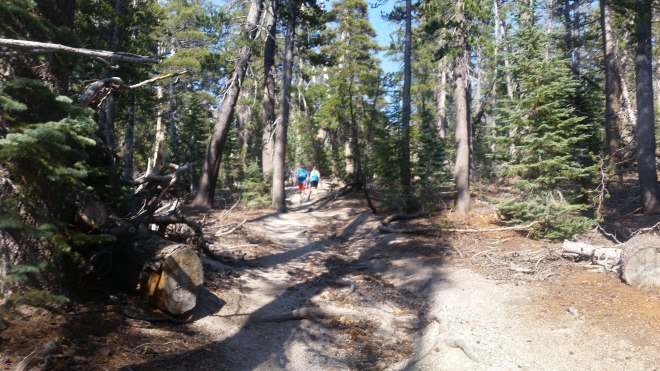 Then the path levels off and turns down the far side of the mountain — and with the uphill leg complete, maybe I’ll overtake them on the downhill – knees bent, I’m almost running – but it wouldn’t do to pass them at a run, that would violate the unspoken rules of this competition, come across as unsportly and excessive.  Plus it’s a rest day.

A glimpse of Horseshoe Lake in the distance – a shout in German from the sides – the couple stops to talk to friends as I whiz pass trying not to look goofy.  This is not a regulation finish.  I am indubitably the loser.

Up ahead I spy the trolley which will take me to town, but it’s too far to sprint.  A second glance reveals that it’s an RV, not a trolley.  I sit down at a picnic table to wait.

The trolley arrives. I glance up the stairwell to see if anyone is exiting, wait an extra quarter-second, then bound up the stairs, only to be waived back by the driver, as people are rising from their seats and inching toward the door, seemingly in slow motion.

Back to the hotel: laundry, dinner, download maps, pack, bed.  Tomorrow it’s back into action at Yosemite. 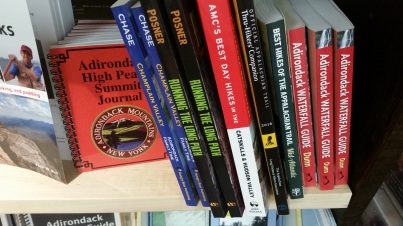 2 thoughts on “Bus to Devil’s Postpile”