Henry David Thoreau’s 1862 essay, “Autumnal Tints,” contains colorful descriptions of New England’s fall foliage, including sugar maple and northern red oak, as well as more humble plants like bearded grass and pokeweed.  Of special interest to me was Thoreau’s commentary on the red maple (Acer rubrum):  he’d noticed that as early as the 25th of September a small red maple on the edge of a meadow had already turned a “far brighter red than the blossoms of any tree in summer” and that the tree was all the “more conspicuous” in contrast with the rest of the forest, which was still green:

Some single trees, wholly bright scarlet, seen against others of their kind still freshly green, or against evergreens, are more memorable than whole groves will be by-and-by. How beautiful, when a whole tree is like one great scarlet fruit full of ripe juices, every leaf, from lowest limb to topmost spire, all aglow, especially if you look toward the sun!

In recent weeks I’d spotted solitary maple leaves dotting the trail, splashes of scarlet among the prevailing greens and browns of the forest floor.  This Sunday would be the 25th of September — and based on Thoreau’s essay it seemed precisely the right time to go scouting for the season’s first red maples to have fully changed their color.  My friend Steve Aaron was looking for a mountain to climb, so I invited him to join me and  Odie the Labradoodle for an attempt on Fir Mountain, one of several pathless peaks that rise above the headwaters of the Esopus Creek. 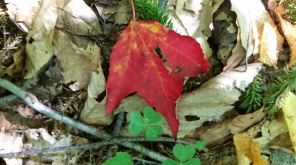 Thoreau wasn’t merely writing about the colors of leaves.  He was also making the point that “there is just as much beauty visible to us in the landscape as we are prepared to appreciate.” Put differently, perception of beauty requires some form of “preparation,” without which you might miss it (Thoreau seemed to think this was the case with many of his peers).  This comment resonated with me, as I realized that the essay had in a sense “prepared” me to appreciate the special nature of red maples, or at least it had inspired me to head out in search of them.

Saturday evening Odie and I drove to the Catskills and hiked in to a camping spot near where we’d meet Steve the next morning.  Scattered along the trail lay a handful of maple leaves, glistening dark purple in the headlamp’s light.

The next morning we met Steve at 9:00 AM sharp.  Soon we were walking down the road and then turning into the forest preserve, where we followed an unmarked path through a grove of hemlocks until we reached the Esopus Creek.  Here the water murmured across a broad, smooth shale shelf and then slipped into a quiet pool hidden below brush-covered banks.  Further north, this quiet creek picks up the discharge from the Shandaken Tunnel, which links in the Schoharie Reservoir some thirty-odd miles away, and then turns east and rushes past the town of Phoenicia, where fishermen stand thigh-deep casting flies while tourists float and bob on rubber tubes.  A few miles later, the creek empties into the Ashokan Reservoir, from which the water descends into and flows through a long aqueduct that feeds into New York City’s water supply system.  And then it pours out from faucets, showers, hoses, hydrants.  But here all was quiet.  The wind was still, and the birds and insects were hushed.

Fir Mountain lay roughly 2.5 miles to the north, but instead of following an azimuth directly there, we turned west and headed uphill toward the summit of Winnisook Lake Mountain.  This wasn’t the most direct line, but it would avoid some extremely steep and rocky terrain that guards Fir’s eastern flank.

The climb to Winnisook Lake Mountain was steep enough!  The distance was only a mile, but we rose from 1750 feet at the road to 3200 feet at the summit, for an average grade of almost 30%.  It was one step at a time.  Our feet sank into thick, dry leaf litter as we climbed past ferns, club moss, and moss-covered rocks and passed underneath beech, birch, maple, ash, and cherry trees.  The steep northern slope blocked the sun, keeping us mostly in the shadows.  After a long time a little bit of light peaked through the trees high above, indicating the top of the ridge was finally drawing near.

Upon reaching the summit, we encountered a wide clearing ringed with trees, full of wispy ferns glowing pale green, and we finally saw the sky and felt the sun — such a contrast to the shadowed, tangled forest we’d been struggling through.  Standing right in the middle of the clearing, as if it had been waiting for us, was a red maple, bright scarlet from head to toe.

Here it was 154 years after his essay was published, and Thoreau’s observation about the timing of the red maple was spot on, as was his comment on the contrast between its scarlet leaves and the rest of the forest.  And it was fair to say, we had experienced this only because his essay had prepared us to do so.  To see beauty, you have to know what to look for:

Why, it takes a sharp-shooter to bring down even such trivial game as snipes and woodcocks; he must take very particular aim, and know what he is aiming at. He would stand a very small chance, if he fired at random into the sky, being told that snipes were flying there. And so is it with him that shoots at beauty; though he wait till the sky falls, he will not bag any, if he does not already know its seasons and haunts, and the color of its wing, — if he has not dreamed of it, so that he can anticipate it

When Thoreau wasn’t exploring the forests around Concord, Massachusetts, he was reading up on natural science.  He could identify, describe, and cite the scientific names for birds, plants, and trees that he encountered throughout the northeast, and he knew a great deal about how the natural world was perceived by Europeans, ancient Greeks and Romans, and Native Americans.  He studied nature in order to better appreciate it.

Steve, Odie, and I paused for a moment, enjoying the sunlight on the top of Winnisook Lake Mountain.  I heard a few chirps and nasal-sounding “yanks” and glancing up caught sight of a small bird hopping about in the branches.  Its chest and face were white, there was a black cap on the top of its head, and the rest of its feathers were blue-gray.  You can imagine my surprise when that evening my wife pointed to a picture of the very same bird, which she had coincidentally spotted that day further south in the Hudson Valley.  It’s called the white-breasted nuthatch.

From the summit of Lake Winnisook Mountain, Fir Mountain still lay 2.5 miles away, but at least we were now on top of the ridge.  Even so, covering that distance could take a long time in thick forest, and if we were going to make it there, we needed to plunge back into the tangled gloom and get moving.  The plan was to follow the crest of the ridge, normally the most direct route to the next peak, but not so easy to do when vegetation cloaks the view.  The trick, I explained to Steve, is to look for a little bit of light through the leaves, which tells you the slope is falling away; light on both sides means you’re on the crest.  At first, the ridge was narrow and obvious, but then it broadened out.  After a bit it seemed we had veered to the east, so I turned the other way to get us back on track.  Then Steve asked if we hadn’t just gone in a big “U” and checking the GPS, I saw that we had.

After this, we did a better job of sticking to the crest and in due course reached Hemlock Mountain.  On this summit there was a clearing, this time quite small.  On one edge stood another red maple stood, its crimson leaves shining through the green foliage of its neighbors. 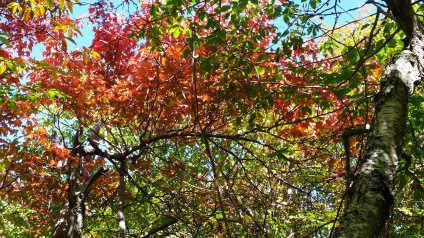 One last peak stood between us and Fir.  We strode out toward Spruce Mountain, following the crest of the ridge, but finding the vegetation increasingly difficult, especially thickets of beech saplings and groves of hobblebush (Viburnum lantanoides) growing in some cases eight feet tall.  The going was slow and tedious and somewhat frustrating.  I sighted along the compass, stepped carefully over rocks and rotten logs, pushed branches away with both hands, and scanned ahead for deadfall, rock ledges, and other barriers.  This required concentration.  Steve and I fell silent.  I felt my face settling into a grimace.

In “Autumnal Tints,” Thoreau had written, “Each humblest plant, or weed, as we call it, stands there to express some thought or mood of ours; and yet how long it stands in vain!”  This afternoon, the natural beauty of the hobblebush was lost on me, although a few days later I reflected that perhaps beauty lies in the ability to move through these thickets.  With a little more practice perhaps, I may be weaving between branches with the grace of a dancer, my expression relaxed, the hobblebush waving me along, its large paddle-shaped leaves patting my shoulders in encouragement.

The summit of Spruce was distinguished by a slight rise in dense forest.  We took a short break.  Steve shared a piece of peanut butter and jelly sandwich with Odie.  Despite our best efforts, we had run out of time for Fir, so we opted to head downhill from here and regain the road.  I steered us around the steepest terrain, while we fought through a few more hobblebush thickets, until the forest finally opened up and we were able to stride more easily and peer through the trees to where the slope fell away into the valley.  Soon we were crossing the Esopus once again, about a mile downstream from where we’d started.

We walked back to the parking area.  A small red maple was standing quietly along the side of the road.  Looking up at the ridge we’d just traversed, I saw dark green slopes and here and there a faint splash of red. 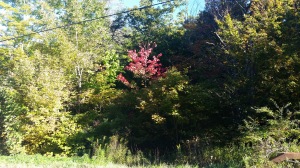 A small Red Maple has grown, perchance, far away at the head of some retired valley, a mile from any road, unobserved. It has faithfully discharged the duties of a Maple there, all winter and summer, neglected none of its economies, but added to its stature in the virtue which belongs to a Maple, by a steady growth for so many months, never having gone gadding abroad, and is nearer heaven than it was in the spring. It has faithfully husbanded its sap, and afforded a shelter to the wandering bird, has long since ripened its seeds and committed them to the winds, and has the satisfaction of knowing, perhaps, that a thousand little well-behaved Maples are already settled in life somewhere. It deserves well of Mapledom. Its leaves have been asking it from time to time, in a whisper, “When shall we redden?” And now, in this month of September, this month of travelling, when men are hastening to the sea-side, or the mountains, or the lakes, this modest Maple, still without budging an inch, travels in its reputation, — runs up its scarlet flag on that hillside, which shows that it has finished its summer’s work before all other trees, and withdraws from the contest.

In Search of Autumnal Tints

5 thoughts on “In Search of Autumnal Tints”