Spring had arrived early, it was quiet at work, and so I made plans to take Friday off and head to the Catskills, with the goal of bagging two or maybe three more mountains in my quest to hike all thirty-five of the highest peaks barefoot.  The forecast called for temperatures in the 50s, reports indicated that all the ice was gone, and the 90% chance of rain seemed only a minor consideration.  How could a person not want to be in the woods on a day like this?  And what about a dog?  Feeling in good spirits Friday morning, I hopped out of bed, gave a shout for Odie the Labradoodle — and off we went, arriving in due course at the Seager trailhead deep in the western Catskills.

Early last year, I had run up this trail on the tail end of a 30-mile jaunt to five different summits.  On that trip, I had admired the Shandaken creek and taken note of the abundant hobblebush in bloom, but wearing shoes, I hadn’t paid much attention to the trail itself.  Now I discovered that it was a delightful path, mostly soft earth, with scattered rocks and gravel in only a few places.  Odie took point, while I sauntered along admiring the tall maple and beech that sheltered the creek and the hemlocks lining the slopes above.  The path crossed the creek and various tributaries about four or five times, and these crossings were small adventures with a few steep banks and plenty of slippery wet rocks.  At one point I was struggling with my balance (bare feet having less traction than rubber soles), and Odie came bounding back, evidently concerned, to point out the best way.  But there was no need to worry, I made it across safely and we marched on.

The Shandaken is a lovely creek.  On the last trip, I had been captivated by one particular spot where the water rolls over dark slate ledges and then pools in a shallow cove before rounding the next bend; this time I noticed how the stream poured through a channel worn in the stone and came spurting out the other end.  The ancient Greeks believed that water nymphs called Naiads presided over bodies of fresh water, and it’d be surprising if some kind of spirit hadn’t claimed this choice spot, although perhaps not a Naiad (on account of the distance from Greece).  It’s the kind of place where on a nice day you’d happily sit and watch and listen — but not perhaps when bad weather is on the way, and so with a glance at the clouds and a growing sense of urgency, I pressed on.

The sky was dark.  Down in the valley the air was still.  The path soon turned steeply uphill and headed toward a saddle on the ridge 1,300 feet above .  As we ascended in elevation, the wind began to rush through the trees.  It seemed as if the winds were composed of separate entities: one gust would come darting through the woods, tussle with a few trees and then move on, while another roared high overhead.

The path turned rockier and now I was stepping from stone to stone.  An unmarked trail would take us to Big Indian, our first destination, but it’s very easy to find and follow, and after a short jaunt up 200 feet and perhaps a quarter of a mile we arrived at the Catskill 3500 Club canister and signed in.  Now the winds were incessant, and I was starting to feel chilled.  I put on a long-sleeve t-shirt and then pulled out a light-weight Goretex jacket from my pack.

Back down from Big Indian, we proceeded another half-mile or so along the marked trail, looking for the point of departure towards Doubletop, where we would step off the trail and into pathless forest, relying on compass and GPS to find our way.  Through the barren trees, Doubletop’s two summits were visible a mile or two off, but with the winds nipping at us and rain clouds massing overhead, it seemed a really long distance.

I set my compass on a 260 degree magnetic azimuth, then we headed off into the unknown, at first following a faint path, but it soon petered out, leaving us stranded in tangled brush.  I stepped over a moss-covered log, then squirmed between two trees, feet sinking in a mix of damp dirt, dead leaves, sticks, branches, and occasional rocks.  After moving hesitantly for a minute or two, I looked up to find with some consternation that the ridgeline I had meant to follow was suddenly up and to the left of us, but the slope to get there was steep, rocky, and covered in trees.  Odie and I proceeded along a shelf that was a little more open, and soon enough we found our way back onto the top of the ridge, where the vegetation wasn’t as thick.

Going barefoot in the woods wasn’t particularly difficult, but it’s slow, and since you’re never sure what’s underneath the leaves, you must step carefully.  Moving slowly, you have time to look up, study your surroundings, and plot your course around the worst of the thickets, boulders, and downed trees that block the way.

Keeping to the top of the ridge, we reached the summit of a small hill and then descended a steep gradient toward a saddle, the final low point before the summit of Doubletop.  The surface was unstable, and with each step thin plates of rock shifted underneath my feet or started to slide downhill.  I made my way down carefully, grabbing onto bushes and small trees and sometimes placing hands on the ground for balance.  Odie was also picking his way down the slope; he went down a little to the left, while I stuck to the right, and then we met up at the bottom.

Now it was time for the final climb.  We passed through a thicket of fir trees and emerged into a tiny clearing where the ground was totally covered in grey reindeer lichen.  It must have been growing here undisturbed for years.  Odie scampered ahead, but then I heard the high-pitched whine he makes when he encounters an obstacle, and sure enough he’d reached a tumble of boulders he couldn’t surmount.  But after scouting around, we found a route through a cleft in the rocks and made it up to the next level.

We passed over a knob covered in balsam fir which slowed us momentarily but were soon back into relatively open terrain shaded by tall trees, and then we started to make our way up diagonally along a steep slope.  Above we could glimpse the ridgeline, bracketed by more sandstone ledges, and crowned with a dense thicket of fir and spruce, the remnants of the boreal forests that enveloped this region after the last ice age and which have for the most part retreated farther north.  Once on top of the ridge, we discovered a large boulder covered with smooth rock tripe lichen growing bigger than anything I had ever seen before, indeed, many specimens were larger than my hand and a few were the size of dinner plates. 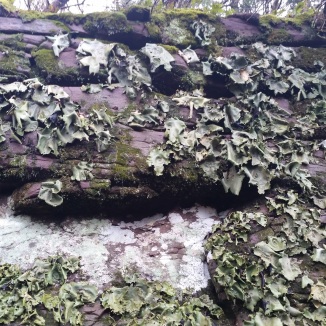 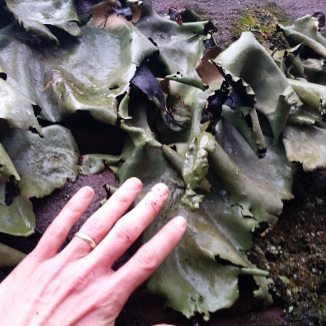 Now we were moving through the boreal fir-spruce forest, following a ghost of a trail that meandered toward the summit.  In the dim light we passed trees draped in dazzling arrays of lichen, stepped through watery patches studded with peat moss, and passed through a final set of sandstone boulders.  On one fallen tree branch I discovered boreal oakmoss and took a small sample to study at home. 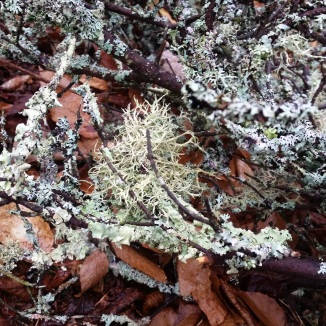 Boreal oakmoss on a tree branch 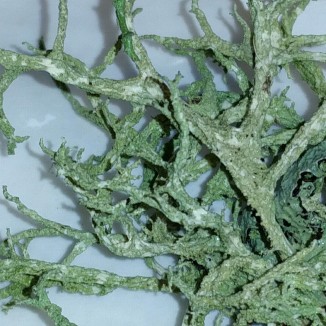 Close up of boreal oakmoss

We found the canister and signed in.  Through the branches there were views to the north, I think, but the rain had finally found us, and we didn’t linger.  Odie led the way back along the tracks we had just made.

By the time we got back to the blazed trail, the drizzle had turned to rain, and the winds were whipping around us relentlessly.  Odie seemed disconcerted.  He kept close to me, sometimes following right behind and stepping on my heels, sometimes going a few steps ahead and then waiting for me to catch up and prod him out of the way.  After a few minutes, however, he gave a little shake and moved out ahead, where he usually likes to be, and then the rain reverted to an intermittent drizzle.

It took a long time to reach the saddle and begin the trek down to the Shandaken creek.  The ground was now thoroughly wet, and on the way down, I discovered that the steepest section of the trail was covered in rocks, which I hadn’t noticed on the way up.  Moving downhill barefoot requires each step be placed carefully, because with gravity’s extra boost, you can land too hard on a sharp rock and scratch or bruise yourself, or slip and suffer an even harder landing.  My pace slowed, the drizzle intensified, and my patience was sorely tried.

Eventually we regained the creek.  What a pleasure it was to stride out a little faster on the flat, smooth dirt!  Once again, I nearly stumbled while stepping across the Shandaken’s mossy rocks, and Odie came rushing back to watch over my crossing.

Over the last mile, my left foot began to ache, but soon enough we were back at the car.  We had planned to do a third mountain, but there was no more time.  At dinner, my left foot was really hurting.  Was it plantar fasciitis?  a bruise?  The next day I woke up early for an 18-mile road race in the town of Wurtsboro, not sure how far I’d make it.  But the foot didn’t hold me back:  I ran hard (in light-weight minimalist shoes), averaging around a 7:20 pace, which wasn’t bad considering the 1,000 foot hill at the start.  The foot ached for a few more days and then was fine.  Feet were designed to be used, it would seem, and with some practice, they get pretty tough.  Certainly that’s the case for dogs.

The round trip to Doubletop was 14 miles, my longest barefoot hike to date.  Average pace was 1.5 MPH; we got up to 2.0 MPH on the trail, while the bushwhacking was closer to 1.0.  There are times to go fast and times to go slow; regardless of speed, a full day in the Catskills was time well spent, as I’m sure Odie would agree.

One thought on “Seven Miles to Doubletop”