To climb one of the Catskills’ highest peaks, barefoot, in 30 F weather, and at night – was this really a good idea?

I studied the map.  Between commitments on Saturday and Sunday, there was a narrow window of opportunity.  It would mean a lot of driving and little sleep, but with winter approaching, this might be one of the last chances this year to scratch another peak or two off the list.

And what could be more important than that?  Over the years, I’d fallen in love with the Catskills’ rugged mountains and quiet forests.  Barefoot hiking was a strategy to slow down, sharpen form, and improve balance and strength.  To climb all 35 of the Catskills’ highest peaks barefoot – this had started as an idea, become a goal, and was now a priority.

During the long dark drive north, the moon lay low on the horizon, as if weighed down by the glowing crescent on its lower side.  A small town, dark and derelict, passed by in the mirror, and then I was pulling over at the trailhead, the car’s clock reading 10:00 PM and the thermometer, 30 F.  Behind me, the moon hovered atop a distant ridgeline, as if it had descended from space and come to rest.

As is often the case in the Catskills, the trail started out along an old logging road covered in rocks.  But instead of smoothly worn shale and sandstone fragments (the eroded remnants of the primordial Catskill river delta), this road was covered in sharp chunky rocks, which must have been crushed by heavy equipment and then trucked here from a quarry.  It would have been a difficult surface to contend with even in the daylight, but at night and covered in a thin layer of dry leaves, the hazards were hidden and impossible to avoid.  One step landed me on a sharp point.  The next got a stone caught under my arch, and then the side of my foot glanced into a lurking rock.  And this happened with every stride.  My first objective was a Y-junction in the trail, 0.7 miles distant and 600 feet up in elevation.  I wasn’t sure I was going to make it.

But I persevered, and once past the junction, the trail leveled out, and now the rocks were interspersed with long stretches of dirt and grass.  I moved quickly and once or twice almost broke into a run.

In the light of my headlamp, I noticed the sparkle of tiny frost crystals forming on the dead leaves that covered the ground.  The sky was clear, and to my right a handful of lights glimmered in the distance, homes or farms in the Catskill’s sparsely settled northern reaches.  A few snow flakes fluttered in the air.  Skins of ice were spreading across puddles, and I crashed through these just for the fun of it.  My feet were cold, but not numb.

About two miles in, the trail took a hard uphill turn to the left, while to the front a tunnel in the woodline opened up.  This was a shortcut to the summit which I had taken the last time here. I had marked this point on my Trail Conference map app, indicating the shortcut could be found after a short climb uphill through the woods.  And so, I stepped off the trail.  The ground was a soft mixture of dead leaves and moss, and I sunk up to my ankles.  But the surface was damp, and my feet began to feel very cold.  Looking down, I saw patches of snow.  I needed to find the shortcut quickly.

I consulted my GPS, but the device’s electronic compass had lost its calibration and the display seemed to be orienting backwards, which confused me, and I couldn’t stop to figure things out, it was too cold.  I knew I just needed to keep going uphill.   I stumbled onto a narrow footpath, but it plunged downhill.  I must have turned around, because the lights in the valley which had been on my right were now on my left.  And then I found myself back on the main trail.

The shortcut hadn’t worked, and my feet were too cold to go back into the woods.  It looked like I was going to take the long way.  This meant another mile and a half of trail, rocky in places, wet in others, but mostly good walking, and I kept up a brisk pace to stay warm.  As long as I kept moving, my feet were fine, although they were getting colder as time passed.  After 30 minutes or so, the trail rose to a high point and then began to descend.  To the left was a forest of birch, shining silver in the headlamp’s glow.

I turned into the woods, stepping into leaves and moss, moving around trees and dying ferns, feet getting cold again, but it was only a few yards until I was standing where the map indicated the summit should be.  And a few feet away, I discovered a small cairn.  Evidently someone else had been here before.

Mission accomplished.  It was time to head back.  On went a pair of LUNA sandals, and the rubber soles did a nice job insulating my feet from the cold ground.  I took off down the trail at a slow trot.

Within a few yards, I spotted a tunnel in the woods leading away from the main trail and recognized this as the shortcut’s end point.  To save some time, I figured I’d take it back, and also figure out where I had gone wrong before.

A narrow footpath led downhill.  The trees were marked with red disks.  I stepped over a fallen tree and then pushed through vines.  The trail dipped more steeply downhill and now the wet and frozen leaves made it quite slick.  I crouched low to the ground to avoid slipping and falling.

Then the way became more seriously overgrown, the disks disappeared, and what appeared to be the path abruptly cascaded down the mountainside.  I hesitated.  I did not want to end up wandering around lost and cold in the sparsely settled valley to the north.  Yet that’s where the path appeared to lead.  Out came the GPS.  It was still orienting the wrong way.  The lights twinkled off to my left.  I took a deep breath, made my way down the hill, and found myself back on the main trail.

And now the reason for my earlier confusion was clear.  On the way up, I had turned off the main trail too early, climbed up through the woods, and then reached the shortcut, but hadn’t recognized it as such.  I would have needed to climb one more stretch uphill, the point where I had just descended.  Duly noted. 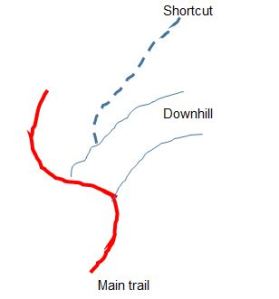 When I arrived back at the car, the temperature read 27 F.  It must have been a couple of degrees colder up on top.

I scratched Catskills high peak #13 off my list, but when I finally got back home, I looked at my feet, and to my alarm, discovered the soles were black — a possible sign of frostbite.  But happily the black washed off in the shower.  And my feet were fine enough to run a marathon the next day, although a little sore for the next few days.