The first weekend in May was warm, dry, and breezy.  Driving home Sunday afternoon, we saw smoke rising in the valley.  Later we learned that a homeowner burning rubbish had accidentally ignited a small fire.  Volunteer firefighters and state forest rangers bulldozed lanes through the woods to contain the blaze.  But the flames lept over the firebreaks and fanned by dry winds spread rapidly across the ridge.  Before it was finally extinguished, the fire had engulfed 2,000 acres in the heart of the Shawangunk Mountains.

Fires are nothing new to this area.  During the 1950s, when blueberry picking was a seasonal industry, itinerant berry pickers set fires to improve the berry crop. Before them, Native Americans used fire to clear the underbrush.  In the local Algonquin language, the word “Shawangunk” is thought to mean “in the smoky air.”

Nonetheless, as flames raged across the ridgeline, the images worried me – and not only for the damage to the wilderness, but also because I happen to organize a footrace that follows the Shawangunk Ridge Trail right through the middle of the conflagration.  I wondered if the trail was still passable.

Two weeks after the fire was out, I met my friends Deanna, Brett, and Marcus, and we headed out to reconnoiter the trail, or whatever was left of it. We parked on route 52 and dropped down an abandoned road into the woods, then quickly began the steep climb up to the ridge.  At first, we noticed only faint scorch marks.  Then we passed a rhododendron bush with withered leaves.  Upon reaching the ridge, however, we entered a moonscape of blackened soil and charred brush. 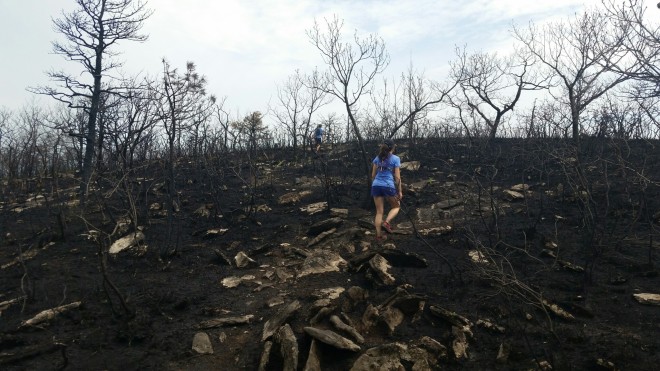 The trail used to run through a tunnel of foliage, with distant views glimpsed through breaks in the brush.  Now you could see for miles.  The path had become a ribbon of brown light through a landscape of ash, and its twists and turns, once dizzyingly circuitous, were suddenly laid bare.

I recognized one particular tree perched on a knob, an old and wizened dwarf pine, its outstretched arms pointing to the next turn in the trail, as if it were some kind of sentinel.  Now it was a blackened crisp. 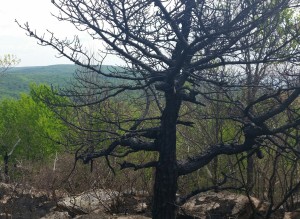 Further on, there were dwarf pine which hadn’t burned but were badly singed.  Their needles had dried up and fallen out and now lay scattered in yellow clusters on top of the black ground.

Yet for all the destruction, young ferns were already pushing up through the ashes.  First their stems unfurled, and then their leaves rolled open. 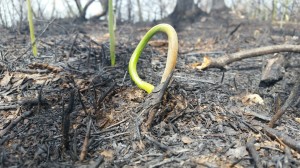 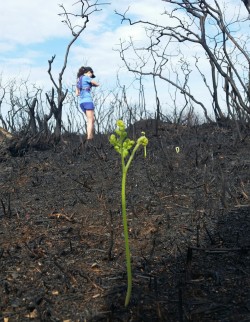 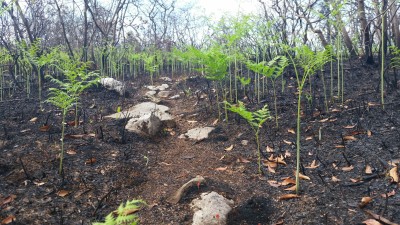 We made it to Ferguson Road, and peered south into deep green woods which had not been touched by the fire.  Then we turned around and climbed the blackened slopes back to the ridge.  Here the path was covered in grass, which had somehow survived unscathed and which now formed an improbable emerald trace through grey and black. 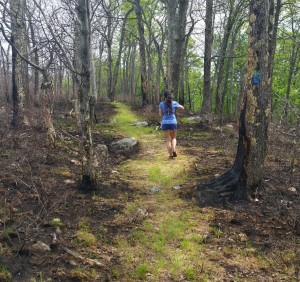 A few yards down the slope, below a series of stone ledges, grew a forest of maple and beech, also undisturbed by the fire, their foliage billowing in the breeze and casting shadows across the forest floor.  Off in the distance we could see hills, valleys, and mountains covered in a mantle of green and blue.

We returned to our cars, legs covered in soot.  I was relieved: there would be no obstacles for the runners in the race.  Instead, they would have the special experience of running through a zone of recent and ongoing change.  I resolved to revisit the ridge in the coming weeks, to witness as much of the rebirth of nature as I could observe and understand. 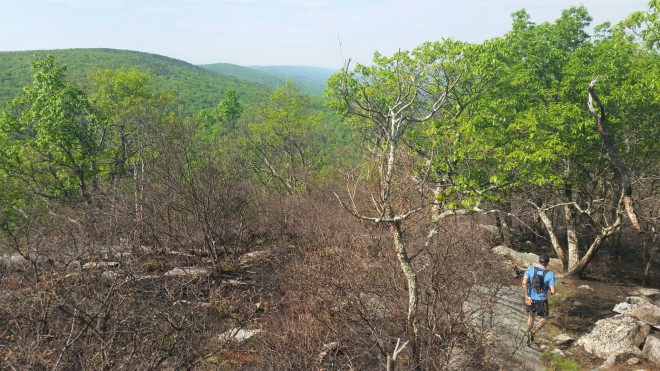 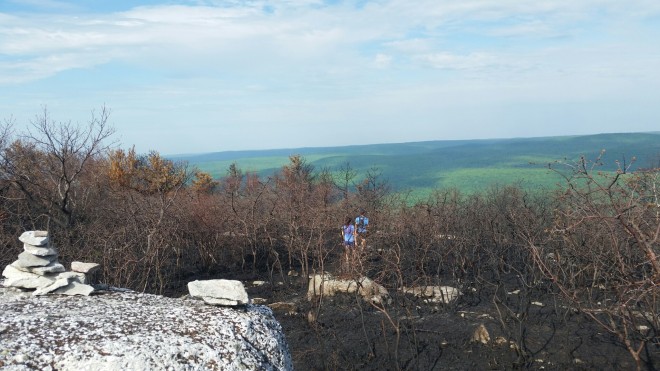 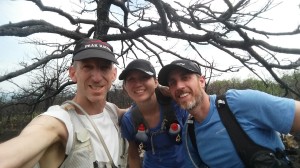 Fire on the Ridge

5 thoughts on “Fire on the Ridge”