With commitments during the day, the only window to sneak out to the Catskills was at night.  It was a little after 5 PM when Odie and I arrived at a parking spot deep in the Schoharie Valley.  Soon we were heading up a steep snow-covered lane…

Rather than trying to observe nature (what can you see at night?), my purpose on this climb was to cover ground, bag a couple of peaks, and get a good workout, so I put an effort into each step.  Up above loomed the saddle between Vly and Bearpen mountains.  In the dim light it seemed almost within grasp, yet the map showed it was 1,100 feet above us.  I trudged along breathing hard, while Odie ranged ahead.  The light faded, the snow-covered trail kept rising, and the saddle continued to hang above us, while farther to the left lay the dark hulk of Vly Mountain.

In fact, the saddle wasn’t very far.  My watch beeped to indicate a mile’s progress, and a few steps later we were passing the hunting cabin that’s situated right at the top of the saddle.  The trails on this mountain are popular with snowmobilers, and the surface was covered in fresh tracks, but in the twilight all was quiet.

A stone cairn had been piled up at the start of the footpath leading to Vly’s summit.  The path rose steeply, and I scrambled along placing snowshoe cleats carefully into the steep snowbanks and grabbing onto branches where available, while Odie trotted along nonchalantly, pausing from time to time to clean the snow from his paws.  The trail leveled out for a bit, and I finally clicked on my headlamp; ahead of us another steep slope glowed white through the leafless forest.  Up above, a half-moon beamed down, and Venus hung in the sky to the northwest.

A 700-foot climb from the saddle brought us to the summit.  After signing in at the canister, we turned about without pausing, not wanting to get chilled.  I clumped heavily back down the path and in some places slid in the snow, while Odie flew down the slope, an expression of wild glee on his face.  He ran ahead and disappeared in the darkness and then paused and looked back, invisible but for two glowing eyes in the headlamp’s beam.  A little while later he fell in behind me and stepped on the backs of my snow shoes tripping me up.  Then he dashed ahead again and abruptly lay down in the path to clean his paws, forcing me to swerve around.  In this manner we made it back down to the saddle.

My watch showed only one and a half hours elapsed since leaving the car.  At this rate Bearpen Mountain seemed within reach, too, and Odie looked like he was up for more.  We turned to the north and strode out purposefully along a snowmobile trail that dipped and curved.  There was a wide vista out to the west.  Somewhere out there the Vly Creek drains south into the Bush Kill, which in turn flows into the upper reaches of the Delaware River, but nothing was visible now except a few solitary lights.  Ahead of us the ridgeline led toward the summit, and soon the trail was rising steeply once again.  From the top the views were now to the east; it was another lonely scene with only occasional dots of light.

Bearpen’s summit is located in the woods just a few feet in from the trail.  On previous visits I’d found a couple of rocks piled together marking the summit, but this evening they were covered in snow or perhaps we missed them in the dark. 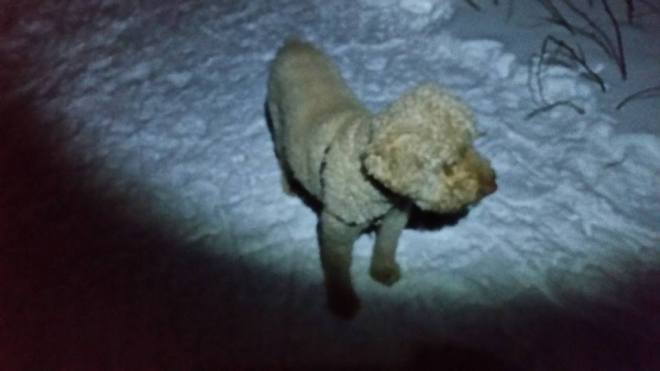 It was time to head back.  The half-moon beamed down on the snow-covered trail, casting shadows of trees and overhanging branches on the dimly gleaming surface.  I turned off my headlamp.  Odie and I began trotting slowly down trail.  As we descended into the saddle, Vly loomed above us once more, its snow-covered bulk outlined against the night sky.  I took off my snowshoes, and we ran the rest of the way down the mountain in the moon light.

Running the Long Path is now available on Amazon.  Click on the image to check it out.